Home / WORLD / ‘I can be much better’: Masterful Usyk promises more after shocking Joshua for heavyweight crown with dazzling London win (VIDEO)

‘I can be much better’: Masterful Usyk promises more after shocking Joshua for heavyweight crown with dazzling London win (VIDEO) 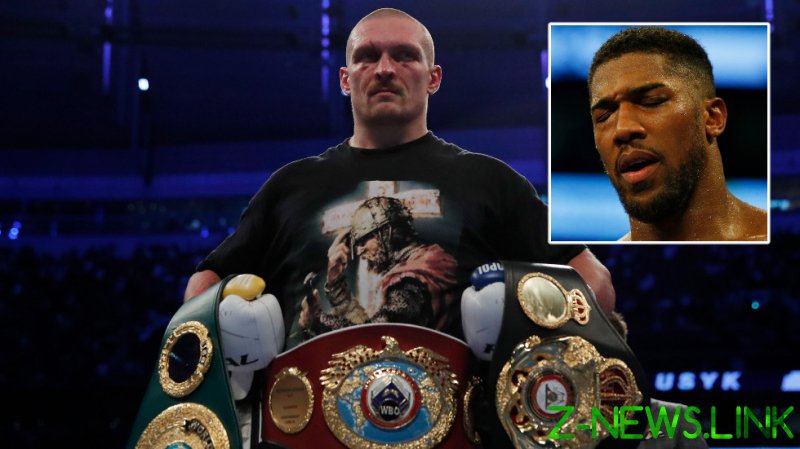 WBA, IBF, WBO and IBO champion Joshua could not find the answers to outsmart Usky in an epic clash, finding himself troubled throughout by the tricky, unorthodox style of the tenacious visiting fighter.

Usyk put on a classy display, looking unintimidated from the off after Joshua made a traditionally memorable entrance in front of the 60,000 crowd at the home of Premier League club Spurs.

“This means a lot to me,” an emotional Usyk told DAZN afterwards, speaking on the anniversary of his wedding to wife Kate.

“The fight went exactly the way I expected it to go. There were a couple of times when Anthony pushed me, but nothing special.”

Appearing in front of huge versions of his initials in flames, Joshua looked relaxed as he strolled out to the sound of Robert Tepper’s 1985 hit ‘No Easy Way Out’, a track synonymous with the Rocky film series.

The champion took the center of the ring in the opening act, working off his back foot in a round that Usyk, wearing the colors of his nation’s flag on his white shorts, won with at least two clever shots that penetrated Joshua’s guard and demonstrated his fighting intelligence.

Fitness, Joshua had predicted, could make the difference, and Usyk looked the quicker man in the second, bobbing, weaving and absorbing a right shot before landing a left of his own.

Usyk continued to stay out of range in the third, landing a couple of straight shots early on to a chorus of coos from a noticeably less cacophonous crowd. That appeared to be a patient set-up for a shot that may have wobbled Joshua 15 seconds before the bell.

A cut developed under Usyk’s right eye in the fourth, which was arguably Joshua’s best round to that point, showing impressive composure to recover from a shaky end to the previous stanza. Halfway through the round, he brought out a right to effect for what felt like the first time in the fight, although it landed to minimal discernable impact.

The rounds were becoming tougher to call after Usyk was widely deemed to have taken the first three. Both men landed before Joshua appeared to finish the round more strongly in what was becoming an increasingly intriguing contest rather than the tactical landslide that Usyk had threatened to make it.

The fast starter was circling away rapidly from danger in the sixth, getting clipped clean with a couple of right hands as he tried to distance himself towards the ropes.

Joshua looked confident in the seventh, making it tempting to feel that Usyk’s speed had slowed and, perhaps, some of his snap. He made a mockery of that by rocking Joshua back with a peach of a left shot, which the undeterred recipient responded to by coming forward and applying more pressure ahead of the pair exchanging an adversarial nod as the bell went, signifying the compelling quality of an unpredictable scrap between two accomplished technicians.

With the distance shortening, Usyk was swinging more, firing off a string of shots as Joshua targeted the right hook. Usyk connected with a vicious body shot down the middle as the stadium stood on tenterhooks.

The ninth suited Usyk given the lead he had built, remaining the most quiet of the fight, and the 10th saw the faces of both men bloodied – Usyk’s to the right cheek, Joshua with swelling to his right eye. Despite both tiring, Usyk did not seem drained in the 11th, setting up a final barnstorming round that he had the better of.

Usyk said that his corner had not pushed him to go for the knockout he looked capable of at times and pursued in the early stages.

“Today, 12 years ago, my wife said yes to me,” he concluded of his feelings after beating his fellow gold medalist. “Today, I’m double happy.”

A potential rematch, he insists, is far from his thoughts – and it may be a distant prospect too for Joshua, who looked like he was nursing a serious eye injury. “I’ve been working so hard since January in preparation for this fight,” replied Usyk when he was asked about the clause that is thought to have existed in the fight contract. “It took me half a year.

“I miss my family, I miss watching my children playing… I’m not thinking about the rematch at the moment.

“You didn’t see the best Usyk. I can be much better.”

Usyk now has a 19-fight perfect career record. Joshua fell to his second defeat following his previous loss, against Andy Ruiz in June 2019.