I am fully vaccinated – but Joe Biden’s Covid-19 vaccine mandates are un-American, unethical and fundamentally illiberal 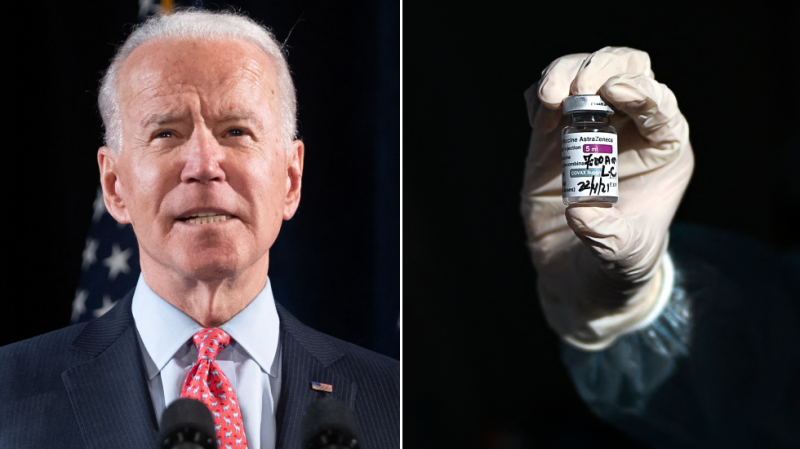 During a recent CNN presidential town hall, Anderson Cooper brought up the issue of some city workers refusing to comply with Covid-19 vaccine mandates. “I’m wondering where you stand on that,” Cooper asked President Joe Biden. “Should police officers, first responders be mandated to get vaccines? And if not, should they be mandated to stay at home, let go?”

“Yes and yes,” Biden answered, a response as un-American as anything any president has uttered in recent history.

I am in favor of vaccines; I’ve seen their value in halting diseases in the United States, and around the world. As a military veteran, I’ve been vaccinated against virtually every communicable disease known to man, including three non-FDA approved experimental vaccines. I opted to get two doses of the Moderna vaccine when it became available, despite already having had Covid-19. I made the choice so that I would be able to visit my parents, who are in their 80s and reside in southern California. It was a choice I made reluctantly but, crucially, it was a choice.

My hesitancy over Covid-19 vaccine comes from the uneven and divisive way the jabs have been framed in the United States. When the United States was first struck by the pandemic, in early 2020, it was clear to me that logic dictated developing a vaccine to counter the virus was a sound choice. As such, I anticipated that the US government would do everything possible to promote public awareness of the need for a vaccine and engender public confidence in whatever vaccine solution was produced.

Instead, the pandemic was politicized – the absolute worst course of action possible if the aim was gaining public trust and confidence. A case in point, comments made by then-vice-presidential candidate Kamala Harris to CNN in September 2020. When asked whether she would take a vaccine that had been rolled out by the Trump administration, Harris hesitated – the worst possible response. “Well,” she said, “I think that’s going to be an issue for all of us. I will say that I would not trust Donald Trump. And it would have to be a credible source of information that talks about the efficacy and the reliability of whatever he’s talking about. I will not take his word for it.”

Comments by Harris and other Democrats critical of any “Trump vaccine” created uncertainty in the American public about the efficacy of the jabs. This concern was prompted by fear that the Trump administration might be rushing an unsafe vaccine to market to boost his popularity on the eve of a presidential election. Polls at the time found that only 50% of the American public was committed to getting vaccinated once a vaccine became available.

Exploiting the Covid-19 pandemic for political gain was a key part of the Democrat strategy for victory in November 2020, as a story in Time Magazine makes perfectly clear. The pandemic was used to justify the overhaul of America’s “balky” election infrastructure and promote voting methodologies Democrats believed would work to their advantage. Pro-Democrat activists petitioned Congress for money to use in this effort; they got $400 million. Private donors chipped in another $300 million. Much of this money was used to promote legislation encouraging mail-in ballots, something the Democrats believed would give them an edge on election day.

While nothing the Democrats did in this regard was illegal, there is no doubt that there was a cause-effect relationship between stoking fear about the Trump response to the pandemic and exploiting that fear to promote changes in the way America voted. The Republicans saw this as well, prompting their own counter-campaign designed to minimize the impact of Covid-19. Politics governed how Covid-19 was being sold to the American public, not science.

Joe Biden’s victory in the 2020 presidential election only exacerbated the politicization of Covid vaccines. The nation was nearly evenly split between those who supported Joe Biden, and those who supported Donald Trump. Moreover, with Donald Trump questioning the legitimacy of Biden’s victory, the existing divide became increasingly vitriolic. Democrats and Republicans were deadlocked over virtually every aspect of social and economic life, including the nation’s response to the pandemic. Having thrown cold water on the efficacy of the “Trump vaccine”, as soon as Democrats took the White House, they were quick to embrace the very same vaccine as their own, promoting its wide-spread use as the solution to America’s Covid-19 problems. When Trump promoted the vaccine, it was seen as “political” by the Democrats. Now that Biden was in power the very same policies were being sold as “science.”

The problem is, it turns out the vaccine doesn’t halt the spread of Covid-19. “People who received Covid-19 vaccinations,” a new study published in the Lancet Infectious Diseases Journal states, “are able to spread the delta variant within their household despite their vaccinated status just as easily as unvaccinated individuals.”

Likewise, the vaccine doesn’t isn’t as effective as had been hoped in preventing the vaccinated from catching the disease. A recent report by the Israeli Ministry of Health noted that more than 50% of the new cases reported in Israel involved fully vaccinated individuals. While most studies do show that a vaccinated person is far more likely to survive a Covid infection than an unvaccinated person, these studies do not address how this number would change if those persons were treated with anti-viral drugs such as Merck’s molnupiravir, the recent clinical trials of which showed that the drug can reduce the risk of getting hospitalized or dying from a COVID-19 infection by 50%.

The problem is, “the science” has been politicized to the point that there is ever decreasing public confidence in the statements made by “experts” promoted by the Biden administration and echoed through a compliant media.

A clear example of this phenomenon revolves around the person of Dr. Tony Fauci, and the issue of mask mandates. At a hearing before the US Senate in March 2021, Senator Rand Paul, a long-time critic of Fauci’s, called the White House medical science advisor out on what he called the “theater” of mask wearing.

“Here we go again with the theater,” Fauci replied. “Let me just state for the record that masks are not theater. I totally disagree with you.”

Barely two months later, however, Fauci appeared to change his position on masks. In an interview with ABC News, Fauci stated that “I am now much more comfortable in people seeing me indoors without a mask. I mean, before the CDC made the recommendation change, I didn’t want to look like I was giving mixed signals, but being a fully vaccinated person, the chances of my getting infected in an indoor setting is extremely low, and that’s the reason why in indoor settings now I feel comfortable about not wearing a mask because I’m fully vaccinated.”

The Rand-Fauci exchange also raised the issue of natural immunity, Covid-19 antibodies in those persons who have already had the disease. A study conducted under the auspices of the NIH’s National Institute of Allergy and Infectious Diseases (NIAID) and National Cancer Institute (NCI) found that 98% of unvaccinated Covid-19 patients developed a viable natural immunity to Covid-19 reinfection that remained viable months after the infection. Nearly 46 million Americans have been stricken by Covid-19. Their immunity against Covid-19 is greater than the approximately 30 million Americans who have received a single vaccine shot, and as good or better than the approximately 192 million Americans who are fully vaccinated, and yet the Biden administration refuses to even acknowledge them in its national statistics.

There is no doubt that the promoters of the Covid-19 vaccine would be able to put up equally convincing numbers espousing the efficacy of the vaccine when it comes to promoting public safety. This is, after all, the official position of the Biden administration, and has become virtual dogma in the mainstream media, where anyone daring to question the absolute need for mandated vaccines is derided as an “anti-vaxxer”, a term implying that the individuals are little more than ignorant cultists who readily eschew science for conspiracy theory.

The war against those who oppose vaccine mandates has taken an extreme turn lately, with high profile intellectuals such as Noam Chomsky actively advocating for the compelled “isolation” of those refusing to be vaccinated from society. Such thinking is not in the minority among Democrats, who tend to view the so-called anti-vaxxer community as little more than a collection of pro-Trump extremists.

Moreover, the concept of “social isolation” has slipped from theory to reality through the vehicle of vaccine mandates, with those who refuse to be vaccinated being threatened with the loss of employment and freedom of movement. This is the net result of the federal vaccine mandates pushed by President Biden, and similar state-wide mandates being promulgated in Democrat strongholds such as California, Washington and New York State. Tens of thousands of law-abiding Americans are at risk of losing their jobs because of these mandates, the supporters of which espouse the “science” as their justification for such draconian measures.

But the “science” doesn’t only support their view. How else would one explain how Florida, whose governor, Ron DeSantis, has declared war on mask and vaccine mandates, has the lowest rate of Covid-19 positivity and death rates? The Sunshine State is way below California, Washington, and New York, where business shutdowns and mask/vaccine mandates are the law of the land. DeSantis has combined an aggressive vaccination program with state-sponsored monoclonal treatment centers to create a “data-driven approach” to combating Covid-19 “free of mandates” that is achieving significant results.

Let’s be crystal clear – no one is doubting the positive contribution to countering the Covid-19 pandemic that comes with being vaccinated. But in a nation which prides itself on the principle of individual freedom, one must question the compatibility of any mandate which coerces a population to do something in violation of their inalienable right to life, liberty, and the pursuit of happiness. Freedom of choice is an absolute, especially when dealing with a vaccine which has been politicized to such an extent that the “science” underlying its efficacy is mistrusted by so many people.

Mandates based on politicized science are as un-American as anything that has beset this nation throughout its history. At a time when the population is already teetering on the brink of a partisan abyss, the last thing America needs is to inject additional social unrest and dislocation. The Covid mandates are political in nature and should be stopped immediately. Any failure to do so simply sows the seeds of open partisan conflict.

A truly free people must be free to make fundamental choices about their individual well-being. Any government which enacts policy that restricts this freedom unreasonably cannot be seen as a champion of freedom and democracy, but rather its enemy. Let there be no doubt – as things currently stand, the Biden administration is an enemy of freedom.