‘I am feeling great,’ Trump tells his supporters from White House balcony, in first public appearance since leaving hospital 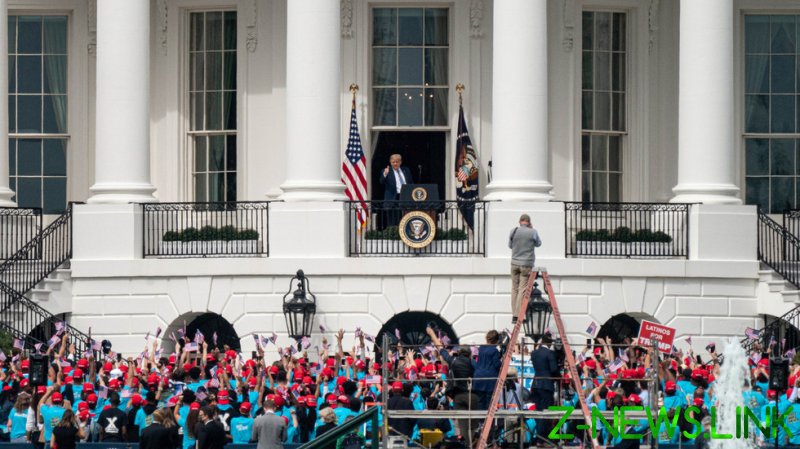 At the planned ‘law and order’ protest, Trump briefly delivered updates on his health following his three-night hospital stay before quickly moving into his usual political rhythms, referring to Covid-19 as the “China virus” and slamming opponents Joe Biden and Kamala Harris.

“Sleepy Joe Biden has betrayed black and Latino Americans,” Trump said when talking about race and minority Americans leaving the Democratic Party – which, according to the president, has delivered nothing but “calamity” in inner cities across the country.

The outdoor rally on the White House South Lawn was organized by BLEXIT, a movement co-founded by conservative author Candace Owens that encourages black Americans to abandon their support for the Democratic Party.

“The fact is I’ve done more for the black community than any president since Abraham Lincoln. Nobody can dispute it,” Trump said, touting his work on criminal justice reform and his recently announced Platinum Plan, which would deem the Ku Klux Klan a terrorist organization and have the federal government invest in black-owned businesses.

Trump also slammed lockdown measures in various states as “unscientific,” saying they can be used to “crush” an economic comeback. He blasted Democrats for wanting to “shut it all down” again.

At approximately 17 minutes, Trump’s Saturday speech was much shorter than his typical campaign talks. Supporters that came out to see the president, who has been out of the hospital nearly a week, were all required to wear masks.