Home / WORLD / Hunter Biden’s conflict of interest silenced by ‘fake mainstream media’, but Trump’s own people are in on cover-up 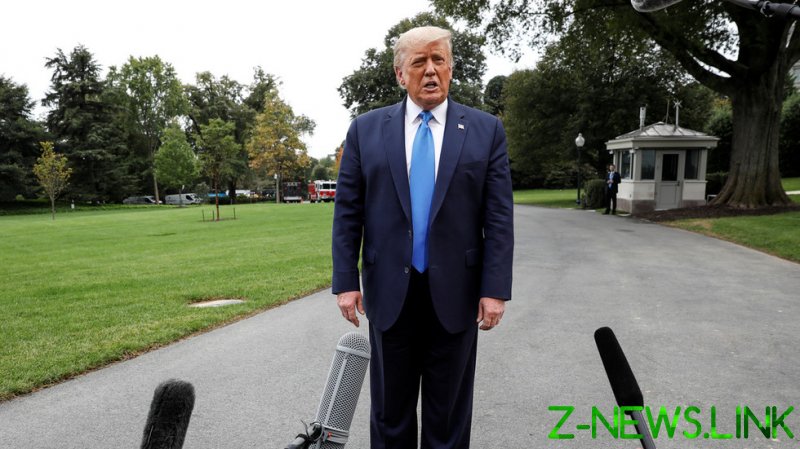 Joe Biden should “leave the campaign” because he “knew everything” about his son Hunter’s shady business dealings overseas, Trump said on Thursday in an exclusive interview with Fox News Radio. He was referring to the 87-page report, published Wednesday by Republicans on the Senate Homeland Security and Finance Committees, which looked into Hunter Biden’s business dealings while his father was Barack Obama’s VP.

“I look at Hunter Biden today, where he stole millions of dollars, stole millions,” Trump told Brian Kilmeade, adding that “his father was in on it.” The “corrupt” Biden “knew his son was getting all this money from China, from Ukraine and other places,” Trump said.

In a follow-up tweet, Trump pointed out that Hunter Biden received a $3.5 million wire from a Russian billionaire. That would be Elena Baturina, the richest woman in Russia, and widow of the former Moscow Mayor Yuri Luzhkov. The report says she sent Biden’s company Rosemont Seneca Thornton the wire transfer for unspecified consulting services in February 2014, citing confidential documents.

Trump is clearly infuriated that both Biden and the media are shrugging the whole story off, given the insane amount of scrutiny he has been subjected to since 2016 for alleged – but never substantiated – “Russian ties.” His campaign was even spied on, before and after the election, on the basis of a salacious “dossier” fabricated by a British spy working for the Democrats.

By contrast, Hunter Biden’s relationship with Burisma is well-documented, and Joe Biden was filmed boasting about getting an Ukrainian prosecutor fired – but to Democrats and the media, it’s a “conspiracy theory,” which they even tried to use to impeach Trump back in December.

To the surprise of precisely no one, the very same outlets pushing ‘Russiagate’ for years now scurried to spin the Biden report. Hunter’s Burisma job was “problematic” but the report “doesn’t show it changed US policy,” is how the Washington Post put it. The Daily Beast called the report a “hatchet job” and “politically motivated.” The New York Times said the report “Finds No Evidence of Wrongdoing” and “appeared to be little more than a rehashing of unproven allegations that echoed a Russian disinformation campaign.” And so on, and so forth.

Even Fox, which aired Kilmeade’s show where Trump made the comments, made sure to extensively quote Biden campaign spokesman Andrew Bates, who called the report “a foreign attack against the sovereignty of our elections with taxpayer dollars – an attack founded on a long-disproven, hardcore rightwing conspiracy theory.”

While Trump is not wrong to argue he’s running not just against Biden and the Democrats, but the entire mainstream media backing them – much like in 2016 – there’s just one tiny glitch with that line of reasoning: his own administration is backing up the Democrats’ narrative!

First there was William Evanina, the ODNI official appointed to oversee all election intelligence briefings by acting DNI Richard Grenell, Trump’s trusted envoy. Evanina told Congress in August that “Russia is using a range of measures to primarily denigrate former Vice President Biden and what it sees as an anti-Russia ‘establishment.’”

Later that month, Trump’s primary rival and now supposed ally Sen. Marco Rubio (R-Florida) signed off on a “bipartisan” Senate Intelligence report that was a rehash of every single discredited “Russiagate” talking point the committee’s real chair Sen. Mark Warner (D-Virginia) could cram in there. The media had a field day with that one.

Then, on September 10, Treasury Secretary Steven Mnuchin – one of his original cabinet picks – sanctioned Ukrainian lawmaker Andriy Derkach, a major source for the Senate Republicans’ report, as a “Russian agent.”

It was Mnuchin, not the media or the Democrats, who described Derkach’s publication of alleged phone calls between Biden and Ukrainian President Petro Poroshenko as “foreign interference in an attempt to undermine” the upcoming presidential elections. The recordings promoted “false and unsubstantiated narratives concerning US officials… with the intent to discredit” Biden, he added. None of this was actually substantiated, mind you, but US sanctions by definition don’t need to be.

So when Trump argues that the US mainstream media sides with the Democrats and cares about “Russian ties” only when they can be – and have been – weaponized against him, he definitely has a point. Yet when it comes to Mnuchin and Rubio siding with that narrative against him, he’s as silent as Joe Biden on the issue of Hunter. Seems like in post-facts America, the swamp drains you.