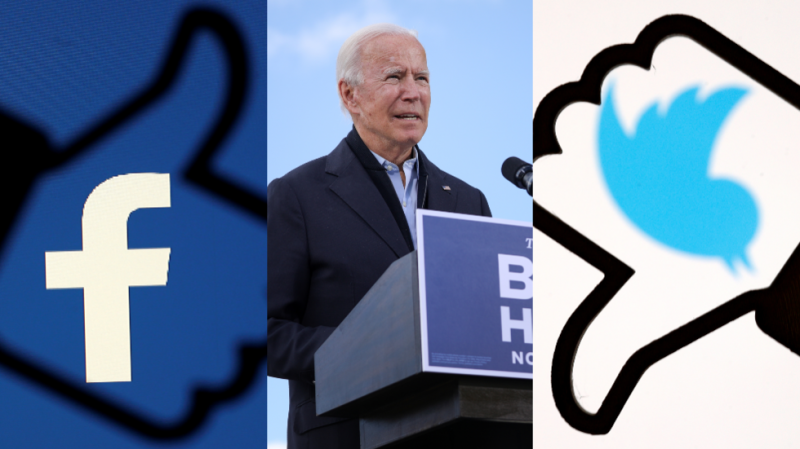 Described by President Donald Trump on Tuesday as “the laptop from hell,” a computer allegedly forgotten by Hunter Biden – the son of Democratic candidate Joe Biden – in a Delaware repair shop last year has proven an embarrassment for the former vice president.

As the New York Post revealed last week, its hard drive contained emails that reveal questionable dealings between the Bidens and a Ukrainian energy firm, as well as a scheme by Hunter to enrich his family through his Chinese connections. The alleged misdeeds in the emails fly in the face of Joe Biden’s previous insistence that he knew nothing of Hunter’s foreign business dalliances.

Big tech, however, was determined to keep the news from going viral. Facebook spokesman and former Democratic Party staffer Andy Stone said his platform would artificially reduce the story’s distribution, until it could be pored over by its “fact-checkers.”

The suppression campaign worked. According to data compiled by research firm Newswhip, and published in Newsweek on Monday, the story reached around half as many readers as similar anti-Trump bombshells.

Neither the tax returns story nor the Atlantic’s “suckers” report were subjected to the same restriction and fact-checking by Facebook, despite the fact that the Atlantic’s report remains entirely uncorroborated and the sourcing of Trump’s tax returns remains a mystery to all outside the New York Times’ newsroom.

Instead of limiting its reach, Twitter simply banned all linking to the Post’s story, claiming that the emails could have been obtained by hacking – a violation of the site’s policies. The company later backed down and opted to label links with a warning that the contents within were “disputed.” Like Facebook, Twitter did not subject the New York Times or the Atlantic to this same suppression.

For Twitter, the censorship effort backfired. According to a study by software firm Zignal Labs, Twitter’s heavy-handed suppression of the story triggered a huge spike in interest, and doubled its reach. The story was shared 5,500 times every 15 minutes before the ban, and 10,000 times afterwards, an MIT report on the study revealed on Friday.

The phenomenon of censorship leading to an upsurge in interest is a well-documented one. Dubbed the ‘Streisand Effect’, the phenomenon is named for a 2003 lawsuit in which singer Barbara Streisand sued a photographer who shot an aerial snap of her California mansion for invasion of privacy. The lawsuit backfired, and led to hundreds of thousands of people downloading the picture. Before the case, it had only been viewed six times.

More recently, Google’s censorship of the coronavirus conspiracy documentary ‘Plandemic’ and Congress’ resolution against the QAnon movement both brought mainstream attention to what would otherwise have been fringe ideas.

Regardless of the end results, Facebook’s and Twitter’s efforts to bury the Biden story landed both companies in trouble with the Republican Party. Their respective CEOs, Mark Zuckerberg and Jack Dorsey, have both been summoned by GOP lawmakers to Capitol Hill to testify before a Senate Judiciary Subcommittee. President Trump, meanwhile, has called on his party to remove Big Tech’s protection under Section 230 of the Communications Decency Act, which allows social media sites to be treated as ‘platforms’ instead of ‘publishers’, and permits them to police what kind of content they allow on their sites.