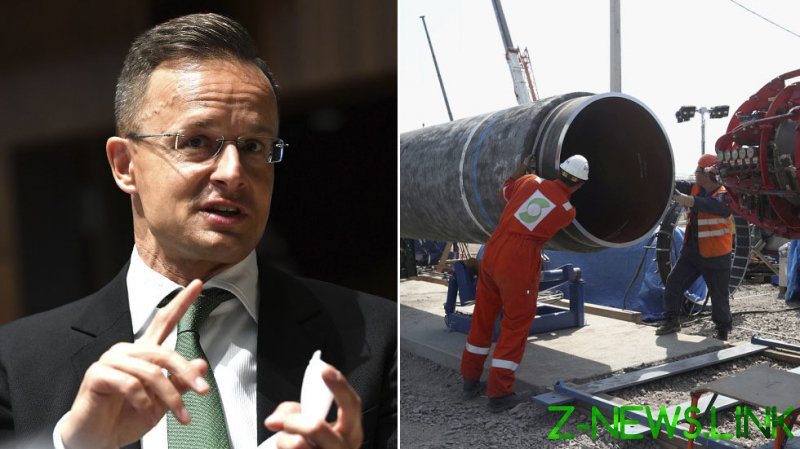 Peter Szijjarto wrote that “The Ukrainian government’s actions aimed against the deal, through the European Commission, are extremely outrageous,” adding “Ukraine has nothing to do with those we make deals with.” He stated that Budapest viewed such steps by Kiev as “a violation of [Hungary’s] sovereignty and national security interests.”

Budapest has accused Ukraine of meddling in its sovereign political decisions after Kiev decried the arrangement as a decision made only to serve the interests of Moscow.

It will see around half of the country’s annual gas supply transported via the Balkans and Austria. Effective from Friday, the new arrangement will cost Kiev millions in transit fees.

Top Ukrainian gas executive Sergey Makogon labelled the deal as a further example of the Kremlin’s attitudes towards its neighbor. Meanwhile the country’s foreign minister claimed that taking business elsewhere “hurts Ukraine’s national interests” and is “not [an] economically justified decision” but one made to “purely please the Kremlin.”

However, Hungary’s foreign minister retorted that Ukraine is simply interfering in his country’s domestic affairs. “For Hungary, energy safety is a matter of security, sovereignty and economy rather than a political matter,” Peter Szijjarto said after executives signed the deal. “You cannot heat homes with political statements.”

Alexey Miller, Gazprom’s CEO, has also expressed his support for the deal as a chance to diversify supply routes through the region, which has “become possible to a large extent thanks to Bulgarian, Serbian and Hungarian companies developing their national gas pipeline systems,” he said.

The new gas deal came as no surprise to officials in Kiev, who had known for some time about a potential agreement that would exclude their country. “We knew that a Russian delegation was already flying there, that this agreement would be signed. When they were signing the agreement they knew about our position,” says Dmytro Kuleba, the Ukrainian Foreign Minister.

Kuleba also promised that Ukraine will “respond accordingly” to “this blow.” He added that “there should be no pity and no sympathy.”

Ukraine itself stopped buying gas directly from Russia in 2015, largely as a protest after the 2014 re-absorption of Crimea. Instead, the country does business at its Western border, spending tens of millions of dollars every month for reverse supplies of gas, originally exported from Russia.
Like this story? Share it with a friend!