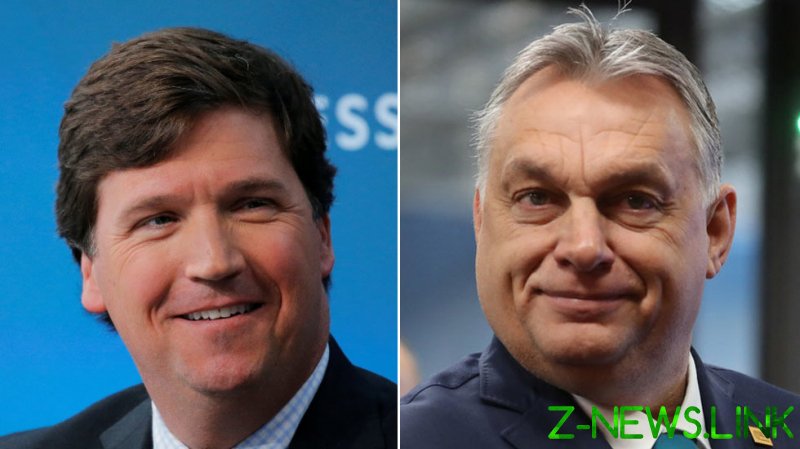 Judging by the hysterical commentary spewing from the media industrial complex over the last few days, one would have thought that Fox News host Tucker Carlson had summoned Adolf Hitler from the grave for an exclusive studio interview.

Instead, Carlson had the audacity to spend an entire week bouncing around Hungary, a tiny landlocked country in Eastern Europe, admiring the public work achievements of its controversial prime minister, Viktor Orban.

Anyone who is familiar with Orban from media reports alone knows they have a better chance of spotting a purple winged unicorn than a single line of positive commentary on this man. According to the totally not-biased Vox, for example, Viktor Orban is a ruler who has “spent the past 11 years systematically dismantling Hungary’s free political system.”

How so, the inquisitive reader may ask. Well, according to the equally balanced Vanity Fair, yet another left-leaning publication of the sort that dominates America’s newsstands, the Hungarian leader was sufficiently cold-blooded to support a “constitutional ban on same-sex marriage and EVEN [emphasis added] passed a new law in June that, among other things, forbids educators from sharing materials, films, and advertisements portraying LGBTQ+ people with students 18 and under.”

And, lest we forget, the horrible Orban EVEN had the nerve to construct a barbed wire fence on the Hungarian border with Serbia in order to protect his countrymen from illegal migrants, who may (or may not) bring with them disease, terrorism, crime and general chaos. In earlier times, this practice was known as maintaining a secure border to protect against invaders. Today, in these days of liberalism gone mad, denying illegal migrants the right of passage into your country is in the same ‘racist’ category as maintaining robust police departments and locking up hoodlums.

Tucker and his film crew strolled around Budapest like bewildered children, transfixed by what a functional nation built square on the back of Christian principles might look like had it not been hijacked by fanatics bearing the impossible promise of ‘social justice’ and ‘equity,’ whatever that means.

At one poignant moment in the broadcast, with the camera making a broad sweep of the ancient city, Carlson explained what he did not find in Budapest.

“There are no tent cities of drug addicts living in the parks here; there isn’t garbage and human waste littering the sidewalks; people don’t get beheaded at intersections; BLM is not allowed to torch entire neighborhoods in Budapest.”

Many people were probably wondering, as they listened to this amazing description of Hungary’s capital, ‘if this is what a dictatorship looks like, how do we sign up?’ The reality, however, is that Hungary is no dictatorship and Viktor Orban is no tin-pot dictator. According to Carlson, who is speaking from first-hand experience, Hungary is a “serious and modern country that cares about its own citizens,” all of whom, incidentally, are entitled to universal healthcare and tuition fee-free secondary education.

So why the non-stop vilification of Viktor Orban and Hungary, a country that has never pursued pogroms, attacked its neighbors for lebensraum, or committed war crimes against foreigners? The reason, once again, is because Hungary puts the health and wellbeing of Hungarians first, which, according to globalist thinking, is a mortal sin.

By contrast, the Biden administration has declared to the world that the United States, in an age when terrorism and disease are rife, no longer protects its territory. The third world responded predictably enough to that news by storming the US-Mexico border. Such an absolutely brainless policy does not help the citizens of the United States, of course, any more than it helps the illegal arrivals, who are susceptible to every horror imaginable – including catching Covid at the peak of a pandemic – as they make the long, arduous trek to the elusive ‘land of milk and honey.’

In the course of his visit, Carlson paid a visit to Hungary’s border with Serbia. What he found there – or rather did not find – should infuriate any American who truly cares about the direction their country is heading, and understands its limitations for taking care of the third world. Hungary’s border exists as the exact opposite of everything the US border with Mexico is: clean, orderly and practically devoid of people, which is exactly how one would expect a border zone to be. America is a far wealthier nation than Hungary, so why does it opt for chaos over order? It seems to be a fair question.

Anyone who thinks the US can solve the world’s problems by simply dropping the moat to the third world need only see what has happened to Democrat-run cities like San Francisco, Seattle and New York City. These once world-class metropolises are now overrun with crime, filth, drugs and dangerous tent cities for the homeless.

The US is not alone in its delusional belief that it can fix the problems of the world (if that’s in fact what the motivating factor is, and not, for example, a cunning method for increasing the number of Democratic voters, as opponents say it is). Once-tranquil Sweden was also forced to wake up and smell the coffee, after crime rates started soaring, women started getting murdered and raped, and police and fire departments began refusing to enter certain neighborhoods without serious backup.

To conclude his visit, Carlson sat down with Orban himself to pick his brains as to why he thinks the Western world despises this leader so much.

“You can’t say simply, ‘Okay, [Hungary] is a nice country. I would like to come here and live here because it’s a nicer life. This is not a human right to come here,” Orban told a noticeably stunned Carlson. “No way, because it’s our land. It’s a nation, it’s a community. Families, tradition, history, language.”

Those last four words explain exactly from where the palpable hatred for Orban and his government derives. As the ongoing ‘social justice’ brigade in the United States has demonstrated, any trace of America’s tradition and history, contaminated as it is with ‘white privilege,’ must be hunted down and eliminated. Statues to America’s founders must be removed, and the history books rewritten. Even the concept of the nuclear family and the English language – even mathematics! – are deemed as somehow racist constructs in the warped minds of these radicals.

Whether they realize it or not, the loony left in America has given “dictators and tyrants” a brand new look. And, judging by the condition of Hungary today compared with that of the United States, it is not a bad one.