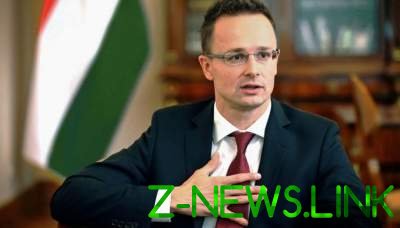 The representatives of Hungary are very unhappy with the education act, which passed not so long ago.

The Minister of foreign Affairs of Hungary Peter Siarto said Friday from the rostrum of the UN General Assembly adopted in Ukraine, the education act violates the right to the use of language of national minorities.

In this regard, he appealed to the UN high Commissioner for human rights to conduct an investigation.

“Unfortunately, the Parliament of Ukraine on 5 September adopted a new law in the field of education. This law is much more cuts right to the use of the language (minority ed.), Prohibits children under 10 years old to receive education in their native language,” said the Hungarian Minister.

He stressed that the law “clearly violates the UN Convention and international standards” and is able to establish a dangerous precedent, if the UN is to remain silent.

“We urge the high Commissioner for human rights to initiate an investigation in connection with the adopted law in Ukraine and to use all available means to stop the violations of minority rights this new law,” said Szijjártó.

He also stressed that Hungary will always support their communities abroad, where they lived in the world.

As reported by UKRINFORM, September 5 the Verkhovna Rada of 255 votes, adopted the law “On education”. The document, in particular, provides for a transitional period for children enrolled for training in September 1, 2018 and is now studying the languages of national minorities, before September 1, 2020. From 1 September the following year of preschool and primary education children can obtain language vidpovidnosti, with parallel studying of the state.

Because of the protests of a number of countries, especially Hungary, Ukraine sent article 7 of the law on education for examination to the Council of Europe.