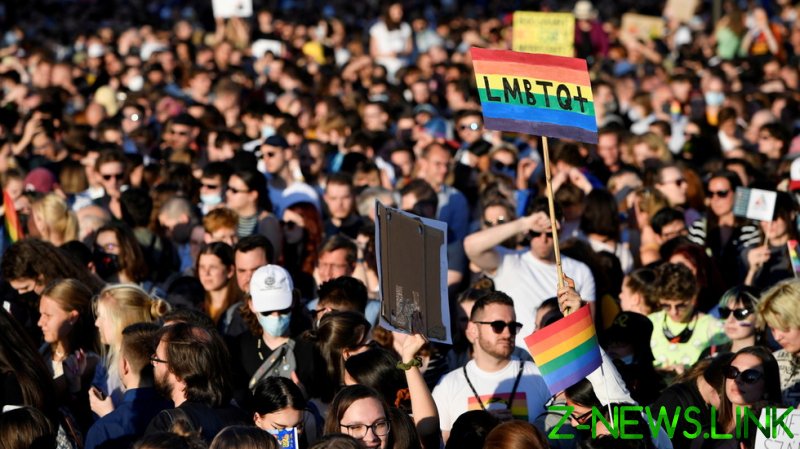 The law was included in a larger bill cracking down on pedophilia by creating a register of child sex offenders, implementing stricter punishments for child pornography, and barring pedophile offenders from jobs where they would encounter children. It also singled out the promotion of LGBT affairs in schools.

Sex education in schools “must not be aimed” at “promoting homosexuality” or “changing gender,” said Fidesz, the ruling party of Hungarian Prime Minister Viktor Orban, in a press release following the vote.

Additionally, those under the age of 18 cannot be shown pornographic content, or any content, deemed as promoting homosexuality or transgenderism – with television shows, movies, and advertisements included.

Television stations and streaming platforms will only be able to target such content at adults.

Though the bill was supported by members of the ruling Fidesz and right-wing Jobbik parties, all opposition parties boycotted the vote in protest, while several civil rights groups including Amnesty International Hungary, the Hungarian LGBT Association, and Budapest Pride condemned the move – comparing Hungary to “autocratic states” Russia and China, which have similar laws in place.

Thousands of Hungarians also took to the streets in protest on Monday, where they carried LGBT rainbow flags and shouted, “We are here!”

The passing of the law is yet another blow to Hungary’s rocky relationship with Brussels, and European Union officials have already begun to condemn it.

“Using child protection as an excuse to target LGBTIQ people is damaging to all children in Hungary,” said Gwendoline Delbos-Corfield, a French Green Party MEP who serves as the European Parliament rapporteur on the rule of law in Hungary.