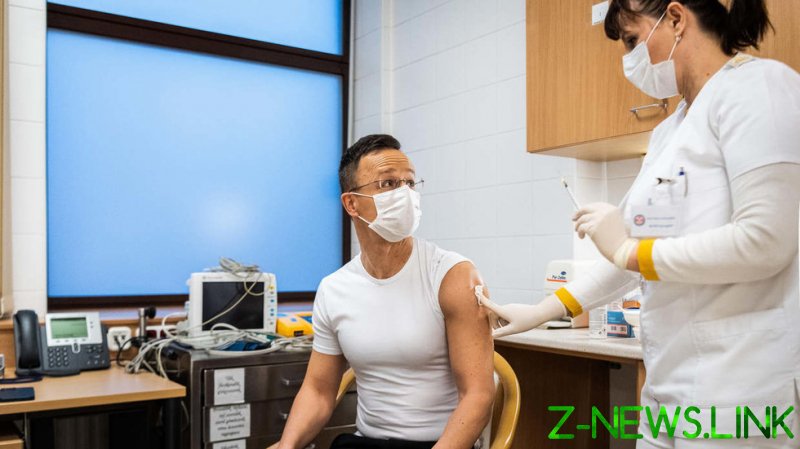 The minister posted a picture of himself receiving the jab on his Facebook page on Friday, as he announced that he had finalized the details of another Sputnik V delivery with Russian Industry and Trade Minister Denis Manturov.

Hungary is now expected to receive 680,000 doses of Sputnik V over the next two weeks.

“I also got this vaccine today,” Szijjarto wrote, referring to Sputnik V in a post accompanying the photo. The minister also said that “only through vaccination can we beat the pandemic,” and called on Hungarians to register for vaccination.

Hungary was the first EU nation to approve the pioneering Russian vaccine in January. Later, it also struck a deal with Moscow to purchase some two million vaccine doses and received the first batches of the jabs in February.

More than 1.4 million Hungarians have since received the first dose of a vaccine in a country which also approved China’s Sinopharm jab for emergency use, in addition to the vaccines greenlighted by the European Medicines Agency (EMA). Over 421,000 Hungarians had been fully vaccinated by March 18, according to the official data. Hungary has one of the highest vaccination rates in Europe, according to some reports.

Various European nations are demonstrating a growing interest in the Russian Sputnik V vaccine. Most recently, a number of German officials and regional heads, including Bavarian Minister-President Markus Soder, called on the EMA to speed up the review of the Russian jab, adding that they would like to use it and possibly even produce it on German territory once it gets the green light.

The EMA began reviewing Sputnik V at the start of March, but is yet to come to any conclusion.