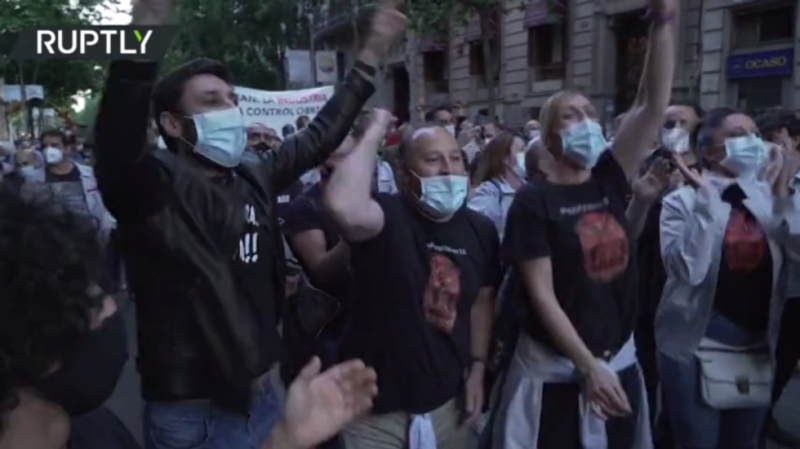 At least 700 people marched in the capital of the Catalonia region on Thursday, local media reported. Protesters blew whistles and horns, and set off firecrackers outside a government building in central Barcelona, as seen in footage from RT’s Ruptly video agency.

Workers and trade union members held banners that read “We demand real future” and “We will not give up.” Employees of the multinational company said the protest is a “wake-up call” for the authorities, as people want an “urgent solution” before three Nissan factories in the Barcelona area are shut down by December 31. Around 3,000 people work at the plants, while up to 20,000 more, including suppliers, are involved indirectly.

The Japanese automotive giant first announced plans to close the Spanish-based plants last year. Nissan said at the time that the decision was part of a worldwide restructuring plan and could cost it up to €1.5 billion. It sparked large demonstrations in Barcelona, with thousands taking to the streets. Following a series of protests that lasted for weeks, an agreement was reached to postpone the closures and try to come up with alternatives to employ people in the region.

“Many months have passed and there are no projects yet. That’s why we are going out to the streets, if we don’t make any warnings, they will just forget,” a Nissan trade union chief, Miguel Angel Boiza, told local media. “We need a big project with a capacity to generate a lot of direct and indirect employment,” he said, adding that suppliers and subcontractors were also taking part in the protest.

While criticized for the lack of progress, authorities say they have been looking into 17 projects to save the thousands of jobs. Many companies have submitted proposals, including of a factory for producing battery cells for electric vehicles.