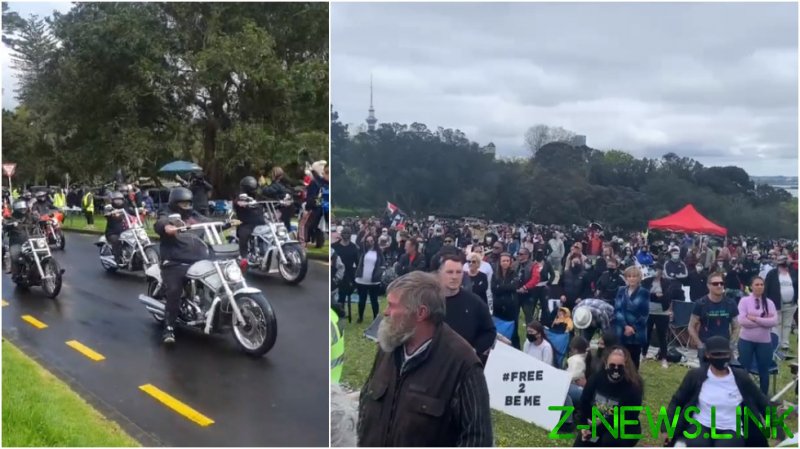 The protesters – who numbered between 1,000 and 2,000, per local media reports – descended on the Auckland Domain on Saturday to demand an end to the lockdowns. A caravan of motorcycles led by Brian Tamaki – a vocal anti-lockdown activist who heads the Auckland-based Pentecostal Destiny Church – was among the first on the scene, captured in videos as the procession made its way to the park.

Remaining peaceful for the duration of the event, the demo saw Tamaki deliver a fiery, 40-minute speech denouncing the draconian shutdown orders, which have remained in effect in Auckland for nearly two months straight.

“Now Auckland’s coming up to 50 days – 50 days we’ve been on home detention. That’s the same thing they give to prisoners who’ve done a crime; it’s an alternative to going to jail,” he said. “I’ve been locked up for over 50 days in my house, and I haven’t done a crime. I’ve done nothing wrong, and I’ve been punished. We are penalized.”

Earlier this week, Brown denounced “gang members” – also bikers – after they gathered for a funeral, which was promptly dispersed by police in West Auckland. He said the funeral was “demoralising for the more than 1.7 million Aucklanders” who have done as they were told and dutifully followed the dictates of their government.

“This is just not good enough. The government needs to make clear that the rules apply to gang members and if they break them they will be treated just like everyone else,” he went on, urging for a harsher police response.

Average Kiwis have echoed Brown’s sentiments in posts online, some demanding a police crackdown on the defiant bikers and “moronic cult” members – apparently referring to the involvement of Tamaki and his Christian fundamentalist following.

While Prime Minister Jacinda Ardern declared a “short and sharp” national lockdown in mid-August after a single Covid-19 case was detected in Auckland – the country’s largest metropolis – the measures have dragged on in the city and still remain in force, despite much of the rest of New Zealand returning to normal in the time since. The government continues to insist on a ‘zero-infections’ strategy in Auckland, seeking to completely eradicate the highly infectious, globe-spanning virus – a feat no other country has been able to accomplish, barring the somewhat dubious claims of the North Korean government.