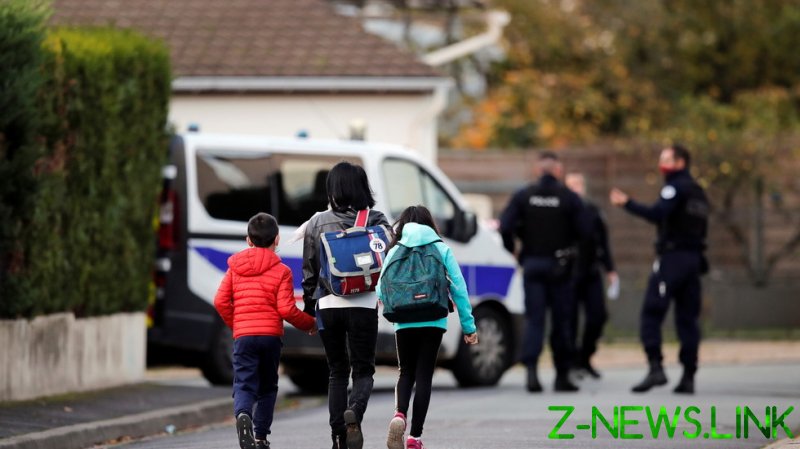 The murder of the schoolteacher continues to send shockwaves through France. The killing that took place in mid-October has given rise to a whole series of disturbing incidents in various French education facilities throughout November, the nation’s education ministry revealed in a recent report.

Minutes of silence held in honor of the teacher were disrupted almost 800 times in various incidents in November, the report says. More than half of all cases took place during the initial commemorative ceremonies held on November 2 and 3.

Nearly half of all incidents took place in colleges while almost a quarter involved primary schools. The vast majority of such acts were committed by students while parents were involved in more than seven percent of cases. Sometimes, the ceremonies were disrupted by third parties, including one municipal staff member.

One fifth of all cases were described by the ministry as “provocations” while another 20% referred to the cases when people thought a minute of silence was a good time to start a discussion. Twelve percent of cases saw students refusing to participate in the event. However, sometimes the incidents were much more serious as 17 percent of the cases involve open justification of terrorism and another five percent included “threats.”

Samuel Paty was beheaded by a radicalized Chechen refugee after the teacher showed his class caricatures of the Prophet Mohammed as part of a lesson on free speech. His killing was followed by a series of terrorist attacks in France and beyond. Nearly two weeks later, three people were killed in a knife attack in Nice.

Following the teacher’s killing and other incidents attributed to the religious extremism, the French government introduced a plan to crack down on religious radicalism. A mosque accused of inciting the hate that led to Paty’s murder was closed at the end of October. Nearly 80 other mosques across France were flagged as potential security threats and now could face closure.

The legislation proposed by the government also involves stricter control over children’s education. Under the new rules, each child in France would be given an identification number that would be used to ensure that they are attending school. Parents who prevent their children from attending could face fines or jail time. The measures are to be applied to all children regardless of their religious or any other background. The bill is expected to be reviewed by the government next week.