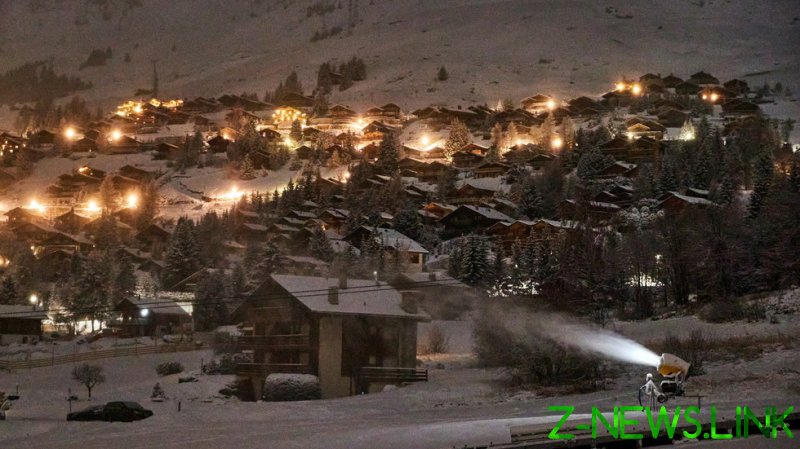 Verbier, a Swiss ski resort extremely popular among wealthy British tourists, has suddenly seen about half the Brits who came there to spend their Christmas holidays disappear without a trace.

The strange incident appears to be little but an act of defiance, though, as the Swiss authorities had earlier imposed a retroactive 10-day quarantine on all arrivals from the UK, backdated to include all those who had landed in the Alpine country since December 14. Announced just ahead of Christmas, the move appeared not to have gone down well with the British holidaymakers.

“Many of them stayed a day in quarantine before they vanished without trace under the cover of darkness,” said Jean-Marc Sandoz, communications officer of the Valais municipality of Bagnes, where the ski resort is located. According to the media, at least 200 of the 420 British tourists who were expected to stay in Verbier did a moonlight flit, though some reports suggested that number might be as high as 350.

Hotel staff noticed something was not quite right only when repeated calls to the quarantined guests’ rooms were left unanswered and meals left in front of their doors were left untouched, according to reports.

The whereabouts of the disappeared tourists remains mostly unknown, although some media outlets are suggesting a number “reappeared” in neighboring France. The authorities called the situation “unprecedented” and criticized the “hastily” introduced quarantine that had apparently prompted some of the tourists to take such drastic steps.

Neither the British nor the Swiss federal authorities have made any comment on the matter so far. However, the news did not go unnoticed on social media, leaving Twitter users wondering how such a big group of people could leave completely unnoticed.

“Is there a finder’s fee for anyone who finds a Verbier Brit?” one person quipped. Another suggested the missing Brits might have fallen victim to “the Pied Piper of Verbier,” while one apparent Harry Potter fan said they might all just have apparated to Hogwarts. One commenter joked that Verbier had simply seen its own version of Brexit.

On Monday, Switzerland joined other nations that banned all flights to and from the UK over fears of a new coronavirus strain that originated in Britain and is believed to be more contagious than the original.

The Swiss authorities were also concerned that some of the British holidaymakers who had already arrived in the Alpine country might be infected with the new virus. As a result, they imposed a quarantine and also launched a campaign to track down the estimated 10,000 Brits believed to be in the country at that time.

In total, more than 50 nations, including most of the EU, has banned travel to and from the UK. Those measures did not prevent the new strain from spreading, however, as it was subsequently discovered in Australia, Denmark, Germany, Italy, Israel, the Netherlands, and, most recently, Spain, and France. Switzerland also reported three cases of the new variant on Saturday. Two of those infected are British citizens.