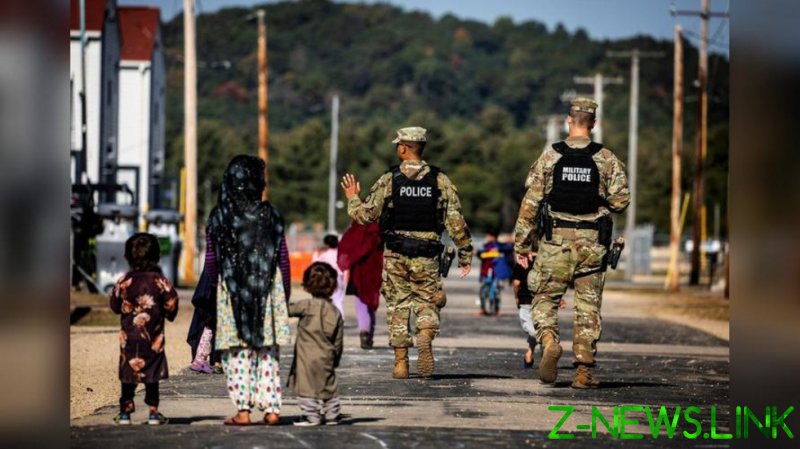 More than 300 of the so-called “independent departures” have occurred at just one base – Fort Bliss in El Paso, Texas – Reuters reported on Friday, citing unidentified sources. Fort Bliss is one of eight domestic bases where the Biden administration has hosted 53,000 Afghans who fled their country on US evacuation flights.

Many of the evacuees were brought to the US under a temporary “humanitarian parole” status. Resettlement agencies have been contracted by the US State Department to help provide the refugees with a smooth transition to living in America. In fact, hundreds have already been resettled in such cities as Houston and Sacramento, California.

Reuters framed the independent departures as concerning because the refugees might not receive all the government benefits that could be available to them and might set themselves up for problems with their immigration paperwork. But the phenomenon also raises safety concerns, as Biden administration officials previously said the refugees would undergo medical and security checks – as well as Covid-19 vaccinations – while being housed on US bases.

Government officials stress that the evacuees who left military bases prematurely had already undergone security screening before arriving in the US, Reuters said. But it’s not clear how such thorough vetting could have been completed on 53,000 refugees during the chaotic US withdrawal from Afghanistan, which left hundreds of people dead and thousands of American citizens and permanent residents stranded in the Taliban-controlled country.

Reuters cited its unidentified sources as saying those who left the bases on their own “generally” had US connections, such as family members or friends in the country, as well as resources to support themselves. Afghan evacuees were told that if they left the bases they couldn’t return and would forfeit such assistance as processing of immigration paperwork and cash to pay for travel to their US destination.

Some conservatives have argued that the refugees pose a security risk and couldn’t be properly vetted during a rushed evacuation of 130,000 people. “This is a dangerous part of the world,” South Dakota Governor Kristi Noem said in August, when she declined to allow refugees to be resettled in her state. “We know that we have a lot of dangerous people there that want to do the United States harm.”

In the short time since they arrived at US bases, some of the refugees have allegedly committed crimes, including child molestation and domestic violence. The FBI is investigating the alleged assault of a female US soldier at Fort Bliss by several male Afghan evacuees. At Wisconsin’s Fort McCoy, one Afghan refugee was charged with assaulting and strangling his wife, while another faces four charges stemming from allegations that he sexually assaulted two children in a barracks and bathroom at the base.

While, as Reuters noted, the refugees who left the bases independently may have difficulty getting expedited work permits and other immigration services, they apparently won’t face any risk of deportation when their temporary authorizations expire. US Homeland Security Secretary Alejandro Mayorkas decreed on Thursday that the Biden administration won’t deport people who are in the country without proper authorization unless they have committed serious crimes or are deemed threats to national security.