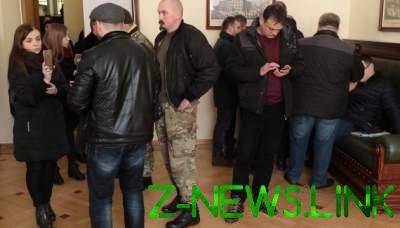 ATO veterans who picketed the Lviv city Council in connection with the incident on the Forum on security issues, moved to the reception mayor Andriy Sadovy.

“We demand the resignation of Andriy Sadovyi and punishment of the organizers of the Lviv forum, responsible for the map of Ukraine with the unrecognized “people’s republics” of “LNR” and “DNR” – said the representative of public organization “Slaves are not allowed into heaven” Ivan Spinski.

He stated that the action of the veterans permanent and will last as long as the mayor will not resign.

Spinski invited all citizens to support the action, accusing the Garden, in particular, the “garbage crisis”, and now the action against the sovereignty, the unity of the Ukrainian state.

Activists are going to “live” in the city Council until the next session, which will take place next Thursday. They will try to submit for consideration deputies the question of resignation of the mayor.

As reported, the participants of the ATO in Lviv was picketed the Lviv city Council and issued a public appeal concerning the presented yesterday at a forum on security card with the so-called “people’s republics DPR and LPR”. The participants insist on the prosecution of the individuals involved, which, in their opinion, are apologists for hybrid war against Ukraine and Ukrainians.