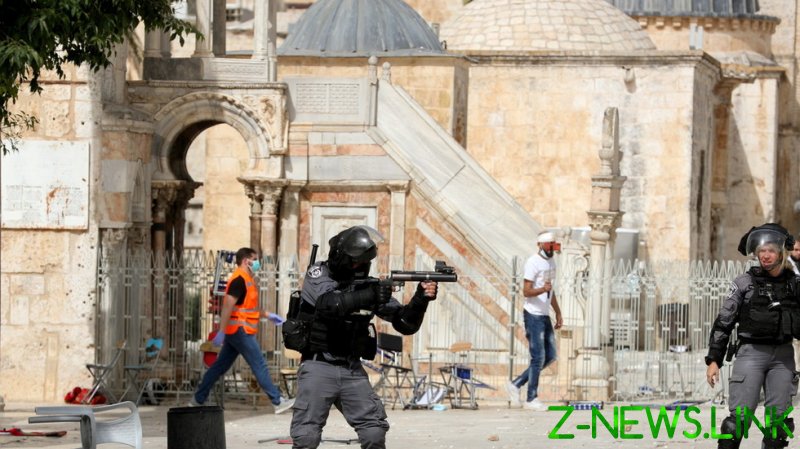 Israeli security personnel used tear gas and stun grenades while storming the holy site, according to eyewitness reports. Hundreds of people have been injured, according to the Palestine Red Crescent, resulting in 50 hospitalizations.

Footage posted to social media appears to show a skirmish outside the mosque between Palestinians and Israeli forces. Protesters are seen throwing rocks as loud bangs can be heard, likely from crowd-control munitions being fired by police.

Another clip posted to social media purportedly shows the moment Israeli forces entered the mosque. Shouting and loud bangs can be heard as tear gas pours into the building. Several bystanders can be heard coughing.

The violence comes after more than 200 Palestinians were injured in clashes with police across Jerusalem on Friday and into the weekend. On Friday night, Israeli police deployed large forces to Al-Aqsa mosque, where tens of thousands of Muslim worshipers had gathered for Ramadan prayers. The crowd started throwing chairs, rocks and shoes at the police, who retaliated with rubber bullets, tear gas and stun grenades.

Jerusalem has seen days of protests and unrest stemming from growing anger over the planned forced eviction of several Palestinian families living on land inside annexed sections of East Jerusalem. Israel intends to give the land to Jewish settlers.

Israeli announced on Monday that the Temple Mount, which includes Al-Aqsa mosque, will be closed to Jewish visitors due to the ongoing unrest. The decision comes as the country celebrates Jerusalem Day, which marks Israel regaining control over the Old City at the end of the 1967 Six-Day War.