Home / Incident / Human target: the inhabitant of Kharkiv was shot at the cops.

Human target: the inhabitant of Kharkiv was shot at the cops. 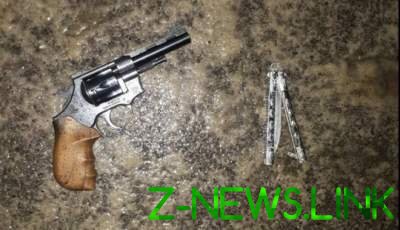 The man was detained.

In Kharkov militiamen detained the man who rushed on passers-by with a knife and shot at the cops. About it reports a press-service of the patrol police.

The incident occurred yesterday evening on the street Military. Local residents appealed to the guards and reported the man with a knife thrown at passers-by. In addition, witnesses noticed the Buster gun and drugs.

See also:  Ice was the cause of a massive accident on the roads of Kiev

Upon arrival, police noticed right under the description of a citizen and tried to talk to him, but he opened fire at the police and took to their heels. The patrol managed to detain the offender, who in the course of inspection, the cops found a knife and a gun. The man was transferred is investigative-task force.

We will remind, at the intersection of Bakina and Malinowski cops noticed the suspicious man and asked him to produce documents. However, the citizen tried to escape and made in the direction of the guards shot three times. In response, the security forces fired a warning shot into the air, and then another one on the fugitive.

See also:  The cause of extinction of human civilization

In the end, a wounded arrow managed to hold.