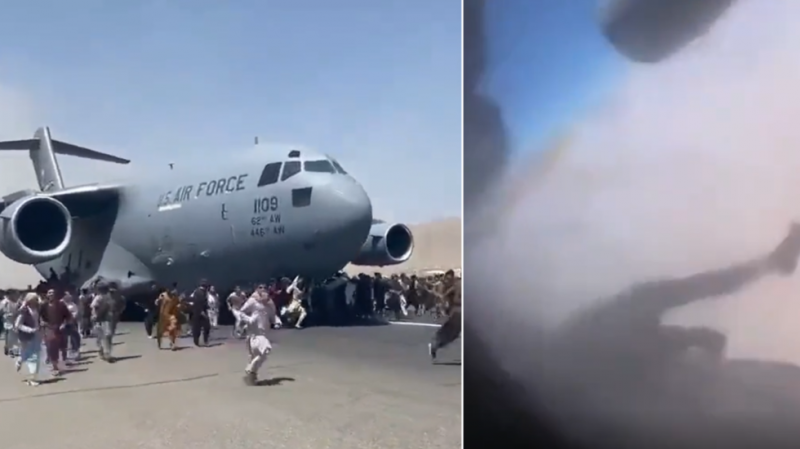 Chaotic scenes emerged from the Kabul airfield in the wake of a full-blown Taliban takeover of the capital, seeing thousands of desperate Afghans flock to the airport in hopes of fleeing the country on Monday as US and other foreign diplomatic staff evacuated.

While earlier footage showed frantic crowds attempting to cling to the hull of an American C-17 transport plane as it raced down the tarmac, at least one person is believed to have become entangled in the craft’s landing gear, according to sources cited by Politico and the Washington Post. The obstruction in the gear rendered it “temporarily inoperable,” forcing the craft to make an emergency landing in a “nearby third country,” the outlets reported. The victim’s remains were found soon after.

In footage too graphic to publish, presumably filmed through a window by a passenger aboard the plane, the person was seen trapped outside the craft in mid-flight, though it is unclear exactly when the video was captured or how long after the C-17 took off.

Several others are also thought to have fallen to their deaths from the transport plane, with one US official telling the Post the tragic deaths “absolutely happened,” though offered few other details as the military was still “assessing the situation.” Disturbing footage has also circulated showing the aftermath of the fatal falls.

At least seven deaths have been reported at the Kabul airport amid a rushed evacuation effort overseen by American soldiers, who shot two armed suspects dead there on Monday after unspecified “security incidents,” the Pentagon said. A military spokesman later noted there was “no indication” the two gunmen were Taliban fighters, though the circumstances surrounding the deaths remain murky.