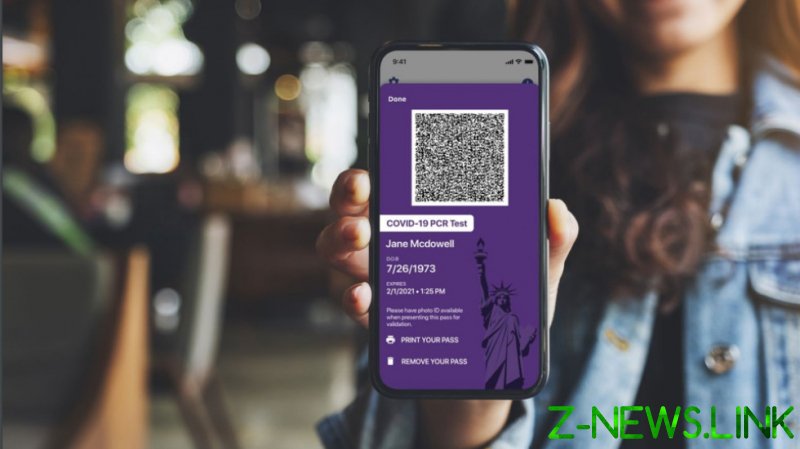 “It’s completely unacceptable for either the government or the private sector to impose upon you the requirement that you show proof of vaccine to just simply participate in normal society,” the governor said during a Monday press briefing, adding “You’re going to do this and what, give all this information to some big corporation?”

While DeSantis argued it is important to continue Florida’s vaccine rollout, especially for the elderly and other vulnerable groups, he said “at the same time, we are not going to have you provide proof of this just to be able to live your life normally. I’m going to be taking some action in an executive function, emergency function, here shortly.”

In addition to the executive order, the governor said he would also ask state lawmakers to craft legislation to permanently ban all vaccine passport schemes, but provided few details.

Earlier on Monday, New York became the first state in the US to launch its own coronavirus passport program, dubbed the Excelsior Pass. Users will be given a unique code linked to their medical records, which can be displayed through a smartphone app or a paper print-out in order to gain entry to certain businesses or event venues. The passes will reportedly not reveal detailed medical history, but only whether the user has been vaccinated or the last time they were tested for the virus.

While New York has not mandated the use of the passes themselves, the state does require large venues to prove that attendees tested negative within 72 hours of an event. Governor Andrew Cuomo has argued the tech, developed by IBM, will smooth out that process and move New York “one step closer to reaching a new normal.”

The debut of the Excelsior Pass follows reports that the White House is stepping up its involvement in a number of private initiatives for similar passports. Asked about federal participation in those projects on Monday, senior White House Covid-19 adviser Andy Slavitt downplayed the administration’s role, saying it is not the government’s place “to create a passport, nor a place to hold the data of citizens.”

“We view this as something that the private sector is doing and will do,” he said, adding that the administration will merely oversee the initiatives to ensure they follow certain “guidelines,” such as “equitable access” and the “privacy of information.” He predicted the passports will reach “all parts of society.”

White House press secretary Jen Psaki echoed Slavitt’s comments later on Monday, saying the passports will be “driven by the private sector” and that the government would focus on “guidelines that can be used as a basis.”

“There are a couple key principles that we are working from. One is that there will be no centralized, universal federal vaccinations database and no federal mandate requiring everyone to obtain a single vaccination credential,” Psaki added.

However, while both officials stressed that the passports will remain fully within the private sector, a recent report in the Washington Post suggested the federal government is more involved than Slavitt or Psaki let on. The Centers for Disease Control and Prevention (CDC), for example, is set to not only “help advise” on the passport rollout, but will also “play a role in determining which organizations will credential and issue the certificates,” according to the Post.

Biden’s Office of the National Coordinator for Health Information Technology recently argued that proof of vaccination “may be a critical driver for restoring baseline population health and promoting safe return to social, commercial, and leisure activities,” according to presentation slides obtained by the Post. The agency went on to warn that a “chaotic and ineffective vaccine credential approach” could hamper the federal pandemic response and “undermine public trust,” suggesting the administration is taking a keen interest in the vaccine passes.

At an event earlier this month, the national coordinator for health IT, Micky Tripathi, raised concerns that the passports could make people feel “like they can’t participate in the return of their day-to-day activities,” suggesting they be “accessible to everyone so no one is left behind.”

Similar worries have been voiced by a number of Republican lawmakers, such as Texas Rep. Pete Sessions, who told Fox News that vaccine credentials “would be a complete government overstep,” adding “individuals in America have a personal responsibility for their health.”

“We must make every effort to keep America from becoming a ‘show me your papers’ society,” Cawthorn told Fox.

Other GOP skeptics accused Democrats of hypocrisy, pointing to widespread opposition in the party to voter ID laws and stricter measures at the border with Mexico.

Rep. Jim Jordan, ranking member in the House Judiciary Committee, said the Biden administration will support the vaccine pass initiative, yet at the same time “doesn’t seem to care about passports when it comes to illegal migrants crossing the southern border.”

As the private sector presses ahead on a patchwork of coronavirus passport plans – at least 17 of which are already underway in the US, according to the Post – some governments have mulled producing official passes. Israel and Denmark launched their own programs last month, while Japan and China followed suit more recently. The European Union is also developing a vaccine passport, with many member states eager to revive travel and tourism after a year of financially ruinous shutdowns, though bloc officials don’t expect the program to be ready until summer.