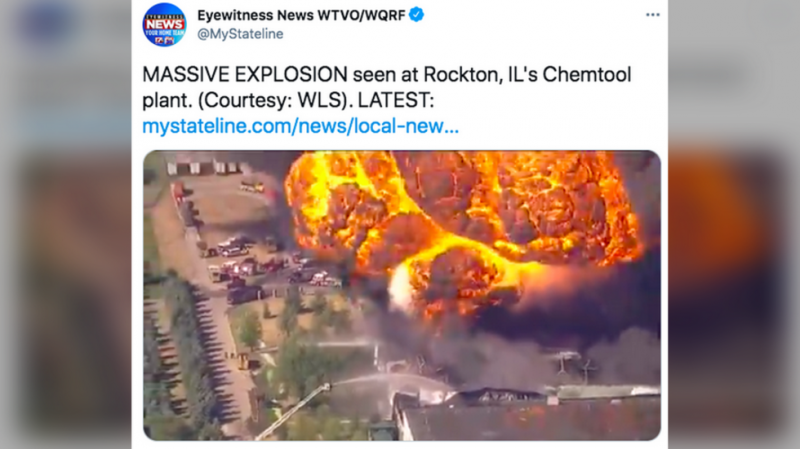 The fire was reported at around 7am local time (8am ET) on Monday at Chemtool Incorporated in Rockton, according to local media. There have been no reports of fatalities.

Rockton Fire Department ordered the mandatory evacuation, and drivers have also been told to avoid the area.

Dramatic eyewitness footage from the scene showed a huge explosion and mushroom cloud at the site, which is close to the Illinois-Wisconsin state border.

Enormous clouds of black smoke and large flames could also be seen rising up from the building. The scale of the smoke was such that it could be seen by plane and via satellite imagery.

There have been reports of ash from the plant falling in the Rockton area and the city of Rockford to the south. A reporter for local broadcaster 13WREX posted pictures of charred debris, which was said to have landed in people’s backyards.

Rockton Fire Chief Kirk Wilson said 70 plant employees were evacuated from the building prior to the arrival of fire crews. One firefighter, who sustained minor injuries and walked to an ambulance, was the only injury reported, he told a press conference.

Wilson also said there is “no danger” to air quality at ground level, explaining that the evacuation zone was a “precautionary measure.”

He said the plan now is to let the oil-based lubricants at the plant burn off over the next few days. Firefighters have stopped using water on the fire to prevent runoff into local waterways to avoid an “environmental nightmare,” he added.