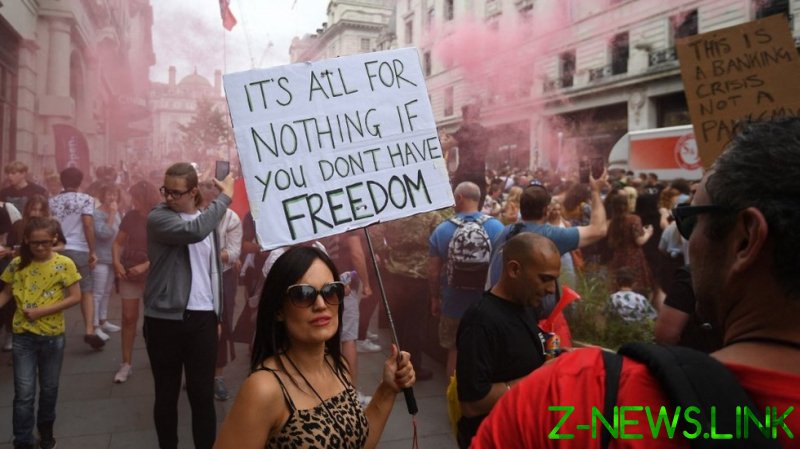 Prime Minister Boris Johnson’s recent decision to push back the UK’s reopening until later next month was an unpopular one, and thousands of demonstrators took to the streets of London on Saturday to show their discontent. Starting out from Hyde Park, throngs of people marched through the centre of the British capital, demanding an end to coronavirus-related restrictions.

Estimating crowd sizes is an inexact science, but attendance easily reached the thousands, if not tens of thousands. Some estimates put attendance into six figures.

While the anti-lockdown crowd raged against the ‘new normal’, climate change activists with the Extinction Rebellion group did the exact opposite. Calling for dramatic new environmental policies in the wake of the pandemic, Extinction Rebellion said in a statement that its members would “stand together to turn their back on a return to business as usual after Covid-19 and demand a new normal.”

Crowds of eco-activists marched through the city, albeit in lower numbers than the anti-lockdown crowd. They were joined by left-wing protesters from the People’s Assembly, a group demanding pay hikes for public sector workers and the scrapping of a controversial policing bill that would give officers more power to crack down on protests.

The city’s DJs are also protesting the shutdown of their livelihoods. Nightclubs have been closed since last March, and the Guardian reported that up to 40% of nightclubs have gone out of business in that time.

Also among the crowd were pro-Palestine and Black Lives Matter demonstrators.

London’s Metropolitan Police arrested 12 people on Friday, and seized items they said “could be used to cause criminal damage and obstructions.” Several members of Extinction Rebellion were among those arrested, though the group claimed that they were “artists,” and the items seized were materials for an art installation.