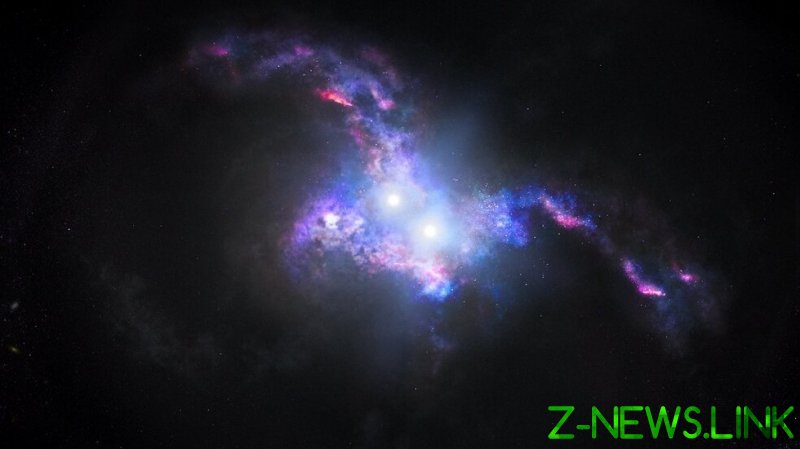 By leveraging the wealth of information collected by the European Space Agency’s Gaia satellite and the ground-based Sloan Digital Sky Survey, the researchers narrowed down their hunt for these rare, though extremely bright dual quasars, hiding in plain sight among the stars across the universe.

A quasar is the extremely bright nucleus of a galaxy, fed by the insatiable appetite of a nearby supermassive blackhole, whose voracious eating habits unleash a massive blast of radiation so bright it can outshine entire galaxies like our own Milky Way.

“We estimate that in the distant universe, for every 1,000 quasars, there is one double quasar. So finding these double quasars is like finding a needle in a haystack,” said lead researcher Yue Shen of the University of Illinois at Urbana-Champaign.

By looking back 10 billion years in time, across space, the researchers found a pair of quasars so close to each other they appear to be one particularly violent object. They then, rather serendipitously, found another quasar pair in a separate colliding pair of galaxies.

The discovery will deepen humanity’s understanding of the exact process behind the rather violent coming together of two massive celestial structures, yielding new insights into the merging of galaxies and the collisions of supermassive black holes.

When the quasars, or galactic nuclei, come together, they generate galactic winds which sweep the remaining gas from the merging galaxies, slowing down or outright stopping new star formation, allowing the new, singular galaxy to form into an elliptical shape.