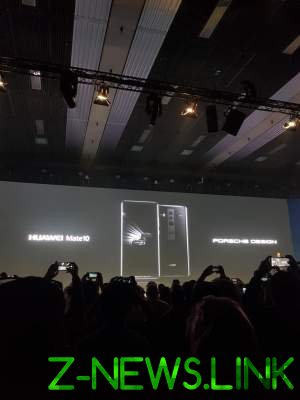 Both smartphone has a frameless design and can also boast of dual main camera Leica, consisting of a colored 12-megapixel module and 20-megapixel monochrome sensor.

Both models operate on the basis of eight-processor Kirin Huawei 970, equipped with special neuromodules. The use of artificial intelligence allows to optimize the battery consumption and to avoid performance degradation over time.

As noted by the representatives of the company, it is a gradual system slowdown is the main problem of all Android devices. According to them, the speed of the running apps on your Samsung Galaxy S8 after a few months of use is reduced by almost 200%, while the new flagship Huawei this figure does not exceed 10%.

Also during the presentation it was announced that the Mate 10 is equipped with a RAM of 4 GB and internal storage is 64 GB, while the Mate 10 Pro got 6 GB of RAM and flash memory of 128 GB. The battery in both innovations has a capacity of 4000 mAh battery and supports fast charging Huawei SuperCharge.

Price and Mate Mate 10 10 Pro on the European market will be € 699 and € 799 respectively. In addition, the sale will go a special version of the flagship — Porsche Design Mate 10 Pro. The limited model will cost € 1395. Date of receipt of the smartphones on the market is not yet disclosed.