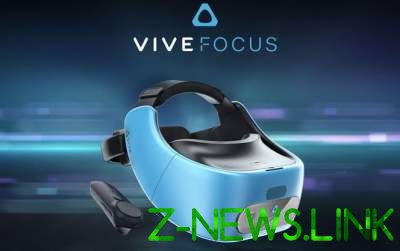 The design of the new device is reminiscent of the HTC and PlayStation VR.

New virtual reality helmet from HTC got the name Vive Focus. To run apps it does not need a personal computer or smartphone.

The device runs on Qualcomm Snapdragon processor 835. This is the first Autonomous VR-helmet, which is able to track the position of the user’s head in six directions.

How to say official representatives of HTC, this device is unique to the market. In particular, the user does not need any external sensors or cameras in order to read the slightest tilts and movements of the headset in space. Other characteristics, including the battery, unknown.

The design of the new device is reminiscent of the HTC and PlayStation VR has a bright blue finish. The headset uses an open platform Vive Wave VR and a library of VR content from the service Viveport.

Interestingly, HTC has refused to release a standalone VR headset platform Daydream from Google, which was announced at the developer conference I/O 2017. The cost and release date Vive Focus is also not yet disclosed.