Home / WORLD / How’s that unity going? Even normally sympathetic polls think Biden has made the US more divided

How’s that unity going? Even normally sympathetic polls think Biden has made the US more divided 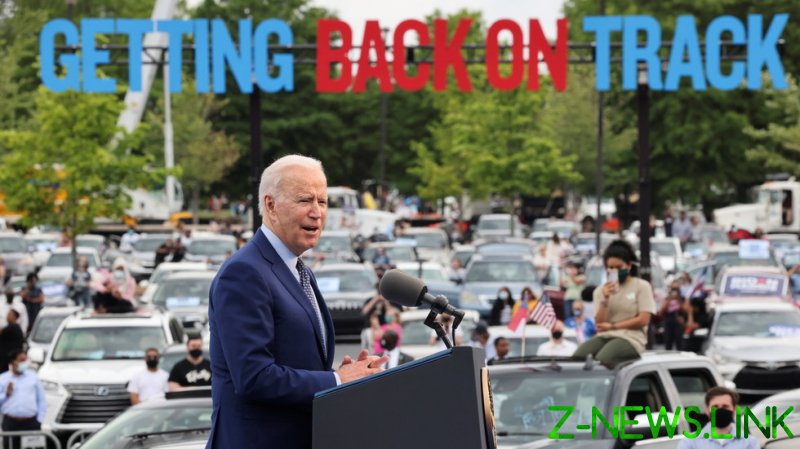 The first 100 days of Joe Biden’s presidency have passed, and a glut of polls show the Democrat enjoying majority support. Furthermore, Biden’s address to Congress last week, in which he pushed liberal police reform, gun control and immigration bills, was rated positively by 85% of viewers.

However, these polls don’t tell the whole story. Biden’s majority support was first laid out in an ABC/Washington Post poll last Sunday, but that poll oversampled Democrats by nine points, relying on them and on left-leaning independents to reach Biden’s apparent 52% approval rate. The CBS/YouGov poll that found 85% support for his message to Congress was even more farcical, with 54% of respondents identifying as Democrats and only 18% identifying as Republicans.

A fresh ABC/Ipsos poll this Sunday found that nearly two thirds of Americans (64%) are feeling optimistic about the direction of the country under Biden, the highest level of national optimism since 2006. Yet the poll’s methodology is vague, and doesn’t mention the partisan breakdown of its participants.

Biden’s opponents likely won’t trust it regardless. Donald Trump’s victory in 2016 flew in the face of almost every mainstream pollster, and Trump himself repeatedly accused the media of concocting “fake polls” to harm his presidency and hamper his chances of reelection. With both the ABC/Washington Post and CBS/YouGov polls notably biased, Republicans and Trump supporters have little reason to trust another mainstream media survey.

Even if the latest poll is fair and balanced, the results aren’t all sunshine and roses for Joe Biden. Throughout his campaign, the former VP promised to “heal” America of partisan division and “unify” the country around him. Even before he fleshed out concrete policies, these buzzwords formed the bedrock of his campaign, promising a return to the supposed civility of the pre-Trump era.

That hasn’t happened. The poll found that only 23% of respondents think that the country has become “more united” since Biden took office. 28% think the US is “more divided,” while the remainder see either no change or have no opinion. Of those who think the country is more divided, 60% blame Biden for the division, while only 6% blame his Republican opponents.

The poll didn’t probe what actions of Biden’s fueled the sense of division, but Republicans would likely point to the president’s near-total undoing of Trump’s immigration restrictions, ramp-up in government spending, flirtations with ending the filibuster, expanding the supreme court and making Washington DC a state, and embrace of Critical Race Theory amid ongoing racial tensions surrounding high-profile police shootings, as responsible for it.