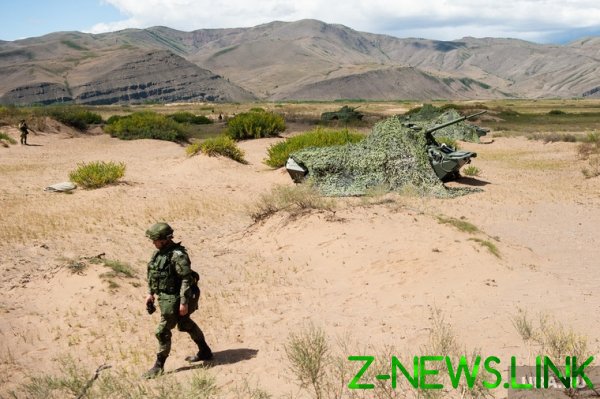 Alexander Alexeev (name changed at the request of the speaker, he is an experienced volunteer, who asked not to elaborate on the details of his military biography) said in an interview URA.RU how the life of fighters as in Syria like the President of Russia Vladimir Putin and in any war in the future might be, “who decides uncomfortable questions”.

— Why the staff of PMCs is a volunteer? Why it was impossible to serve under contract in the regular army?

— The PMC in a different atmosphere. There you a military expert, and in the army sometimes do not know why you serve. PMC feel popular, feel necessary real combat unit. But there are those among us who for various reasons are unable to join the army. For example, because of a criminal record or debts. But the main part is in his heart.

Volunteers in Syria have all but aviation and marine.

— And the PMC is only infantry?

— No, the PMC is a small army that has everything except aviation and Navy. There is intelligence, and armored group and artillery, and unmanned aerial vehicles.

— It is believed that PMCs recruit anybody, and no training whatsoever. Like really?

— It’s a cliché that PMCs recruit anybody. In fact it is not. It is clear that a lot of scum wants to get there, but to qualify is not easy. On the stage of the device in the PMC test physical training and medical records. If you pass this stage you are physically fit, starts tactical and special training. Regardless of education you have to pass infantry training. It includes a grueling workout, when in any kind of weather in the group you crawl through the puddles and run around a lot and for a long time. It may takes a week or two. Then begins specialty training.

— Regardless of this. Even if you came a Colonel in the army commanded by artillery. Training for all at the beginning of the same, starting from the bottom. Only in the process of completing the teaching the instructor gives his verdict who are you: you’re done — be a tank commander is not very going driver. This training lasts different. Maybe months, maybe weeks.

— And who comes to work in the PMC?

—There are just warriors, and ideological guys that preach the greatness of Russia.

But all have in common is that all are there voluntarily.

— Are there any conflicts on ideological grounds?

In my memory they never had. The only notice that PMCs often come with radical views, and go with moderate.

— How men live during a military campaign?

PMCs soldiers never know when you might go to war

— Life varies from geography. If, for example, in the Donbass protected from the cold and rain, in Syria — from the heat and sun. Life soldiers equip themselves. You are planted on the “hill” or “sand”, here you guys suhpaek, water and live. Guys arrange temporary shelters using tents, some even bringing them with you, the top covered with tarpaulins or boards.

Water for domestic purposes, but very poor quality. This water Syrians washed their oil wells. It happens that for the entire trip to wash can not humanly. And all imported drinking water of Syrian production.

— And what about the food?

— In the initial stages of the Syrian operations were some strange sack Lunches production. It is clear that Russian, but not like in the army. Just a cardboard box with food items without the manufacturer when produced.

Then the soldiers began to suffer from monotony. Eat these rations a month or two, and your stomach gets a stake, the guys even depression began.

Later they began to bring the Russian bread. Where they were prepared, brought there from Russia or prepared in Syria is unknown, but this bread everyone was happy.

— And to local markets have been shopping?

— It became easier when spirits (terrorists — ed.ed.) pressed. We went into town, bought regular food, as in Russia, such as fruits, vegetables, meat. But again their effort. All cooking rests on the shoulders of men. Posts cooks we have.

Equipment the soldiers get at home. Replacement is difficult to obtain

Before the trip you provide clothing. But on the site it very quickly becomes unusable. Especially shoes. A replacement from the PMC is very difficult to obtain. So someone with a lucky spare stuff someone buys in Syria.

— As you know tomorrow we go to battle?

— Advance parts offensive to us, no one communicates. This is due to the fact that information is not left to the enemy. In General, we have the concept of “tracer”. Have Chuksikem is a rumor that hovers, but nothing confirmed. These “tracers” every day a lot: we say, we’re home tomorrow, the war ends, on the contrary, tomorrow we will sit or come.

The concept of specificity in the PMC does not exist. You may not be the last to know that tomorrow will be the assault of the million city.

— Not scared every day to live in ignorance?

— It’s depressing. This is minus our PMCs. This aspect of the moral-psychological preparation is not there at all. The soldiers left to themselves. Already prior to surgery telling you guys go do something before driving five hours.

— As the local population belongs to Russia?

— For me, the local population is fanatically in love with Russia. Don’t know why that is, maybe with the local propaganda. In Syria a lot of people speak Russian language. Many of them — the older generation — were in the Soviet Union. Many of the city hung posters with the Declaration of love to Russia. We say that the country has a personality cult of Putin, but it is telling those who have not been in Syria. They have every village his posters hung.

On the territory controlled by terrorists — the middle ages.

— Argued that Syria is a backward country. Is that so?

Territories controlled by [Syrian President] Bashar al-Assad, is a completely secular state. The same damask is not inferior to Ekaterinburg and even better. Driving cars premium, go to the girls in skirts and heels. There is no burqa. In the desert of al-Assad is not, as many think, it is all irrigated. In its place are growing huge gardens of oranges, mandarins and olives. And come to the territory of the militants, everything is ruined.

— There middle ages. 90% of the territory even no light. Stoke the oven with the cows. Medical care there. Under the rule of the militants, the people are very poor live.

— And you help the local population?

— Sometimes. When I went in and “cleaned out” the settlement. Grandmother used immediately out of the houses, carrying food, milk. And we: “What, grandma, can I help you?” We fix fences, corrals for cows put.

In Syria, one of the soldiers of the PMC didn’t want to stay

— But you are not all happy?

— There are supporters of the Islamic state (ISIS, ISIL is a terrorist organization banned in Russia). It seems to have cleared the settlement, all is well. But some grandpa’s 70-year-old dug up a machine somewhere, you shoot back. However, these cases are rare. Basically, the population meets as liberators. This gives me confidence when I see that people are really happy that you came and freed them from the oppression of the militants, from the middle ages.

— One of the men didn’t want to stay?

— At least I have not heard. In the Donbas much left. And in Syria all the more. Despite the people’s loyalty, their friendship, you do not feel at home. In Syria I stayed a week and already the soul is torn home.

There are other people, the climate, the landscape, nothing native. We got there, did their business and left, people are thankful that we received their bonuses, everyone is happy.

— What, in your opinion, the main problem with private military companies?

— What the Russian government is trying to hide them. Why — the answer is no one. We also want the recognition, not to worry, if just that, Putin will leave [the presidency] and we all going to jail. This is why many and in hiding, afraid. If unfolded, then after ten years arrested, allegedly, you were engaged in criminal business. Like a good thing to do — to liberate the world from terrorists, and still survive falls.

Now a conflict is brewing between Turkey and Syria. Many believe that there is retracted and Russia. Can PMCs to take part in it?

— Easy! This organization was created. There’s a song that goes about PMCs on the Internet: “We are the ones who decide awkward questions”. Where regular troops can not enter throw the PMC. USA do it all the time.