How often deceived the Ukrainian drivers 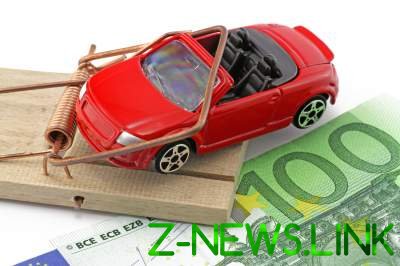 How to avoid becoming a victim of criminals

Despite the active actions of the police in Ukraine is not less Automechanika. In their Arsenal a number of schemes. Journalists, after talking with the experts, find out how often deceived Ukrainians and how to avoid becoming a victim of criminals.

Scheme No. 1: the Commission
Scams are often middlemen who keep the Commission area where they sell used cars. The contract included a variety of paid services, ranging from inspection machines in the workshop and ending with a charge for Parking. The motorist may not even pay attention to what he will have to pay for additional services. As a result, it for his car will receive, for example, 8 thousand dollars, and only 6 thousand dollars.

Anatoliy Larin of service “Test Driver” is not recommended to deal with the Commission sites. Why? Because “about 80% of the intermediaries are deceived in the transaction”. But if you still want to take the risk – read the contract.

Scheme No. 2: the lottery
In Ukraine, scammers have long fooled the gullible citizens the message that they are supposedly under “won a new car”. But there is one little “but” – you need to pay the state duty in the amount of 1% of the cost of the machine. Many paying.

The lawyer Yaroslav Kuts advises not to believe in such “lottery”. Well, who believes in his luck, that you first need to know what the company has organized a lottery, whether the license and where it can be checked, etc.

Scheme No. 3: urgently need money
Often scammers “sell” cheap car because they “got sick” one of my relatives. You will not even show the car. Then you will be asked in advance, citing the poor health of a relative. Then the seller with an advance disappears. Registration, left in Deposit, will be false.

Instead of “sick relative” may be some other reason why the car is selling cheap. For example, “urgent going abroad”.

General Director of “Ukrainian Association of automobile importers and dealers” Oleg Nazarenko says that the buyer should be wary when offered cheap car and hurry with the payment. Remember, where there is a free lunch.

The transmission of the advance you need to register, for example, a receipt, which will contain passport data of all parties to the transaction.

Scheme No. 4: double
On the roads of Ukraine go (until time), thousands of cars-doubles. Scammers fake numbers and registration. Then “doubles” sell (most likely a General power of attorney). As a result, the Ukrainian roads go two or even more identical cars.

See also:  Ukrainian singer spoke about the prohibition of entry of artists from Russia to Ukraine

Oleg Nazarenko warns that if a car salesman wants all sorts of ways to avoid going to the Service center of the Ministry of interior, this should alert the buyer. Check the vehicle before the conclusion of the transaction of purchase and sale.

Scheme No. 5: help the police
Recently in Ukraine at Automechanika has a new scheme. It involved two of the attacker. One posing as a car buyer and the second for police.

“Police” warns the seller of the machine that it wants to “throw” the offender. Arresting him can only be “red-handed”, i.e. if an attacker will go in the car. As a result, the seller himself gives the offender the keys and he quietly steals the car.

The lawyer Yaroslav Kuts advises in this case to know the name of the police, Department where he works, and say that you come to work for him. At this point the scammers will normally stop a phone conversation.