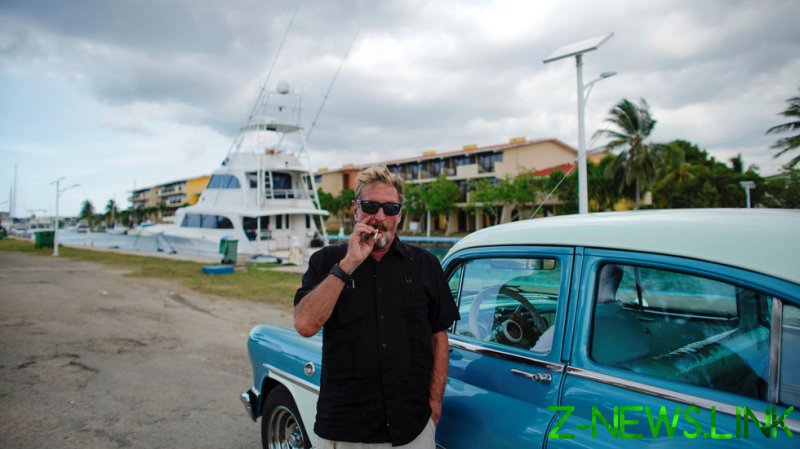 McAfee’s net worth was estimated at $100 million in 1994, when he left the antivirus company he founded. What was left of it following the 2008 financial crisis perished after the government of Belize seized his assets in 2012, his widow Janice said in a tweet on Monday.

“When I met John, which was the day after he was deported from Guatemala to Miami, he had nothing to his name save the clothes on his back,” Janice McAfee wrote.

McAfee also provided financially for 47 of the children he had fathered around the world, Janice revealed. He found out about two more before he was jailed in Spain, bringing the total to 49.

Another portion of his wealth was spent on attorneys “fighting the countless lawsuits brought against him, one of the many drawbacks to naming your company after yourself,” she added.

McAfee, 75, was found dead inside his jail cell in Barcelona on June 23, after a judge ruled to allow his extradition to the US on tax evasion charges. The eccentric ex-millionaire had repeatedly said he would never commit suicide. Janice, who married McAfee in 2013, refuses to believe the official explanation given by the Spanish authorities, and has questioned the authenticity of what they said was his suicide note.

She also argued that McAfee “gained and lost money many times” over the course of their relationship, and was “no stranger to rebuilding himself from nothing.”

His latest venture was cryptocurrency. Yet just a week before his death, McAfee announced that all of his crypto assets had been “dissolved through the many hands of Team McAfee” and there was no secret stash the US government could claim.

“I have nothing. Yet, I regret nothing,” he tweeted.

“John was a master at reinventing himself and he was stolen from us before he could complete his greatest transformation,” Janice McAfee said on Monday.

Starting in NASA’s Apollo program in the 1960s, McAfee went on to work as a programmer at Univac, Xerox, and Booz Allen Hamilton, among others. He developed the world’s first commercial computer anti-virus program in 1987.