Home / Society / How it really looked like Moscow under Stalin 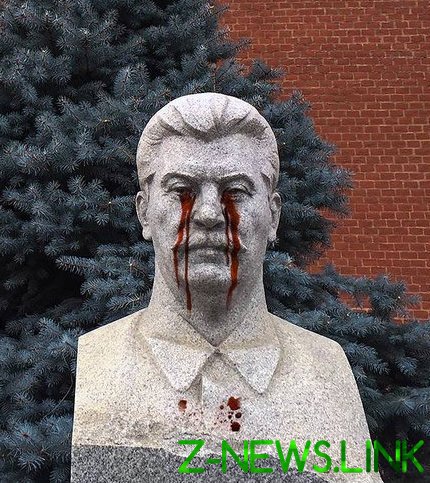 So, friends — today will be a very interesting post about how actually looked like Moscow under Stalin. In the comments to my yesterday’s post about what a poor legacy left after Stalin, some readers wrote comments like “well, it’s a province! But Moscow was sucking money from the regions and fatten!”. This statement is only partly true — Soviet Moscow has indeed pulled money, resources and people from other parts of the Soviet Union, but it is better Muscovites themselves from this life not become impoverished Soviet planned economy was spending my money not on the welfare of citizens, and to support all kinds of wars and conflicts, seeking to extend the scoop on the whole world.

If we look at real, rather than propaganda Moscow in those years — we will see quite plain, provincial and rather poor town with a crumbling tsarist buildings, wooden huts, which are only facades the major avenues covered with a couple of dozen inspirational “stalinok”. These facades were shown in propaganda films, but behind the facade tech real life of most Muscovites. There is a paradoxical situation — in fact, the shovel is not improved the life of anyone — even the Central city of the red Empire lived pretty poorly and wanted to be in the same poverty to get the rest of the Nations of Europe.

So, in today’s interesting post — the story about how it actually looked like Moscow under Stalin. Make sure you check out the article below, write in the comments your opinion, well to friends to add do not forget) And telegram channel also subscribe.

First a few words about what was shown visuals of Soviet propaganda (especially movies) of those years. The “Stalinist” era in cinema can be roughly continue until about 1960 — in 1959-60s, the year starred the latest films in the Stalinist style. In them the sun is always shining, the workers never sweat, never get dirty overalls and communicate solely with quotes from Marx and Lenin. No sex under Stalin of course could not be couples first hold hands, walking on the beach between birch trees (in the background a choir sings), and then immediately out of the hospital, carrying a bundle with a smiling three-month Communist.

Rules “of Stalinist aesthetics” was to show the cities — has always shown only new areas, and only on Sunny days. If there was Moscow, then the emphasis necessarily was placed on “Stalin’s skyscrapers”, as if there was flat — they were always new, modern and half-empty — the audience had to think that every Soviet family has at least four rooms and absolutely free apartment. This style is removed, for example, the film “Starik Hottabych” — showing only new and modern streets of Moscow, a sun-drenched: 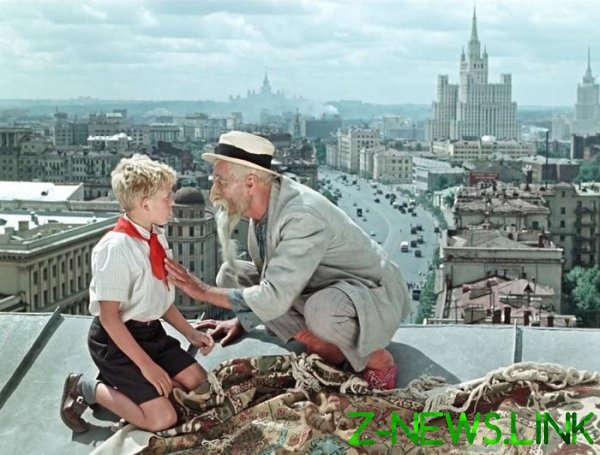 However, sometimes propaganda gave punctures — they are especially fun to find yourself in old movies. For example, the film “True friends” of 1954, the viewer has to admire the Stalinist buildings — long series which we painstakingly long time and demonstrates the operator. But in the episode when the two main characters go from the construction site — we see at the foot of the seven sisters of natural barracks (in the left frame, two-story wooden building right) and some of the antediluvian ruins of red brick with a tin roof and at the threshold of drying Laundry on a clothesline: 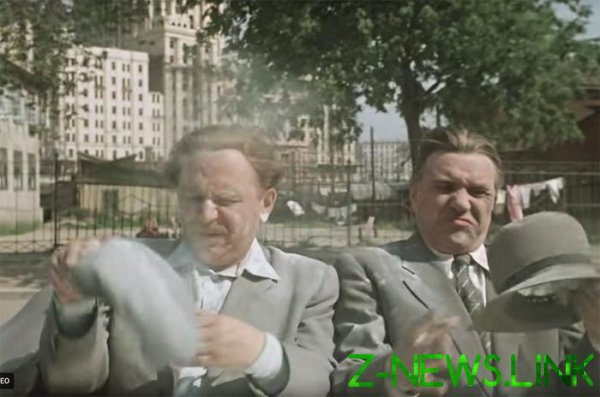 All the attention of the audience in this episode, confined to the main characters that actively clean hats and costumes from construction dust and dry cement, and so the background do not pay attention. I think roughly for the same reasons it missed and censorship — which is required to show Moscow a very pompous and magnificent capital. Meanwhile, the Stalinist Moscow by and large something like that and looked.

Now let’s look at a real card of Moscow the beginning of 1950-ies. In those years, Moscow was visited by the major of the American army Martin Manhoff, who was assistant military attaché at the American Embassy. Especially valuable images that Martin shot not pretentious avenues, and the real everyday life of Moscow in those years — a selection of his photographs recently published the portal “Real time”. Let’s look at them and we.

04. Construction of “Stalin’s skyscraper” on Uprising square. Usually in Soviet films of those years, Moscow tried to show only the high buildings — the capital had to seem something majestic and huge. Plain peeled 2-3 storey houses the Royal buildings in the frame of the promoters would “accidentally” did not get: 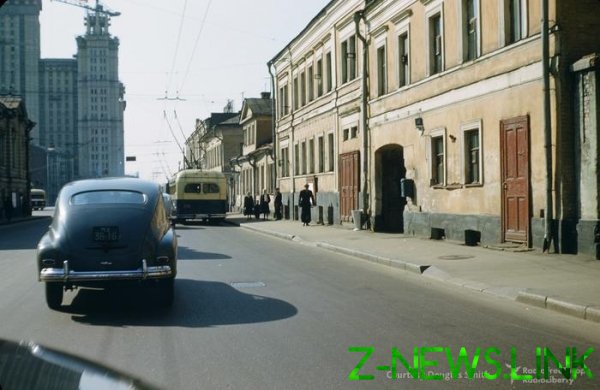 04. Tagansky district of Moscow, development a La “Pyongyang”, with front facades the streets of the house more or less put in order, while in the courtyards you can see the natural huts (covered with plaster on metal lath and wooden second floor), as well as endless rows of old barns. “Here he is rotting capitalism!” — cried some stubborn Stalinist wooden hut in the process of reading the book “Little rags”, and then immediately ran into the rotten shed for firewood and the column for the bucket of water. 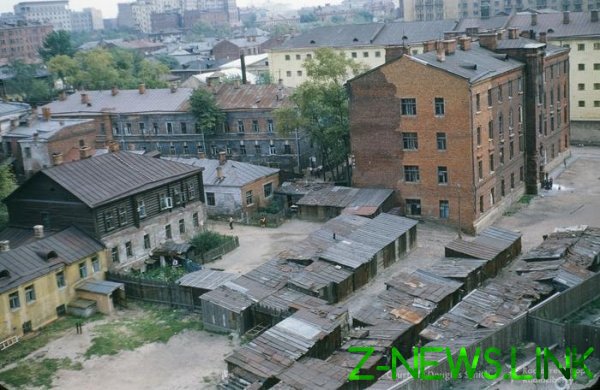 05. For a provincial Soviet moviegoers of the fifties were ignorant of the fact that the centre of Moscow really does not consist of “bright and beautiful stalinok” and of the old Royal buildings which during the years of Soviet power managed to mold and disrepair. Plaster and paint on these at home last time was applied for the last time in September 1917: 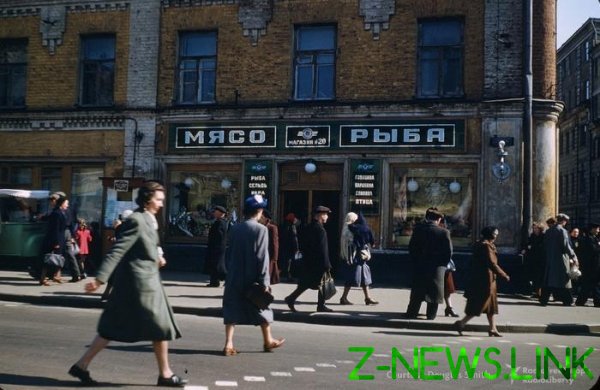 06. Oh, and what do we have here? Do all the store with a kilometer-long tail on the street? Oh well, can’t be — fans of the Soviet Union tell the stories about how under Stalin in stores absolutely free all handed out 200 varieties of sausage and salmon in the boot and ran behind you on the street if you didn’t want to take it. And then came the cursed Gorbachev and it is immediately banned, and also left all the wrappers instead of money. Is it really lying? 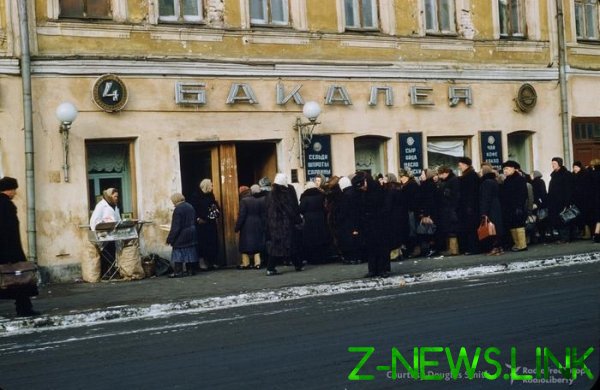 07. Women repairing the asphalt — because as you know, in the Soviet Union was the most free women. 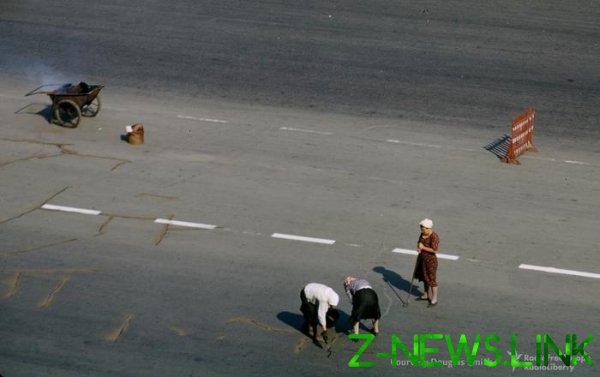 08. Bell tower of Novospassky monastery. Stupid American explained that the surrounding neighborhoods need to take a picture of the two of Stalin in the background, and preferably in Sunny weather but rotten wooden shacks, rustic fences and peeling crumbling tsarist buildings is not necessary to show. 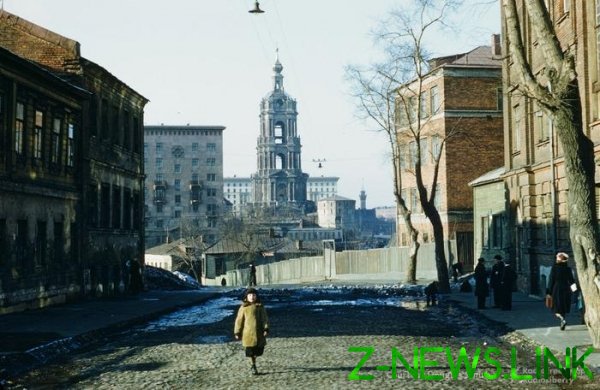 09. Then the Americans generally insolent and began to remove some of the huge piles of garbage in yards. Is Moscow such a thing? I suppose at the state Department took it in the same pavilion where they filmed the landing Americans on the moon! Even the landscape under the debris of some lunar. 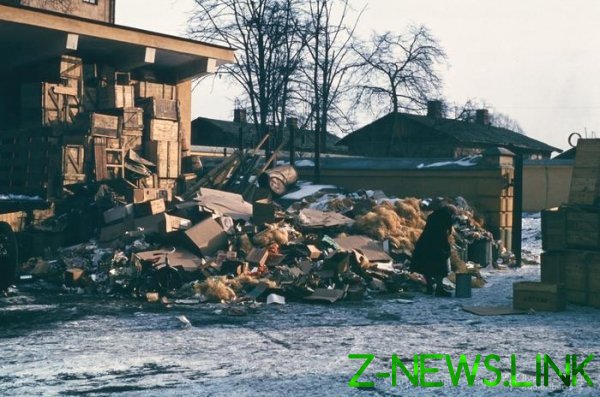 10. A group of mounted police in the parallel Moscow, which is not shown in movies and on TV — on the roads, very few cars, the city center is built entirely of the Royal buildings in ragged and allopenna condition 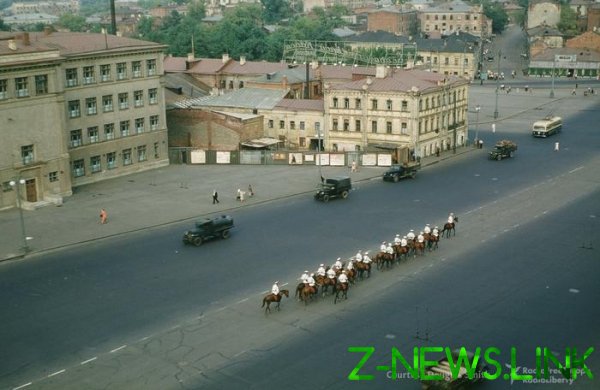 11. Oh and the got prettier Moscow during the Soviet era! 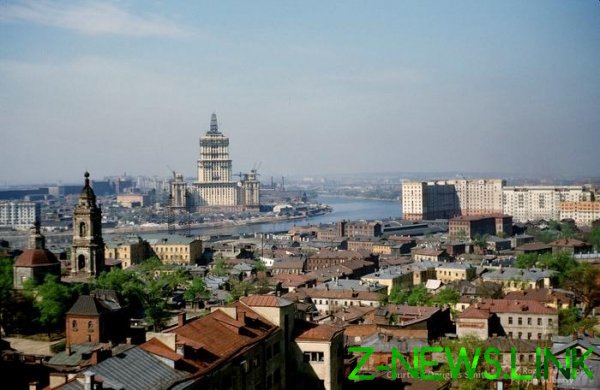 12. And also pay attention to how people are dressed — almost all wear black or darkly earthy tones. Shine brightly in the USSR could only flag and the noses of drunkards. 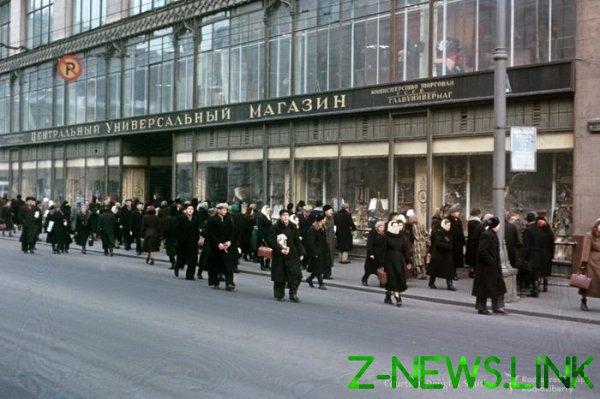 13. Soviet women in Asian shawls, which already by the age of 45 turned in these grandmothers… 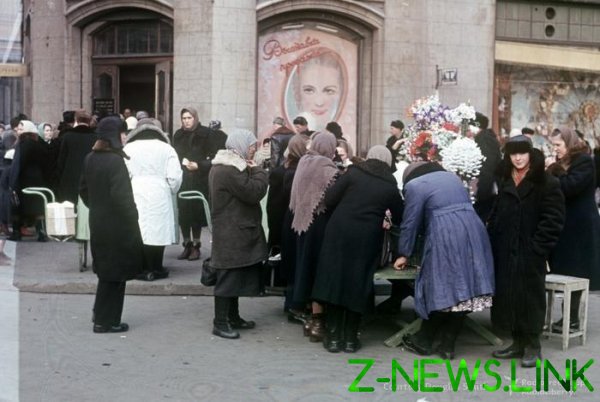 14. In conclusion, I want to say that apart from Moscow Martin Manhow have time to train and rest of the Soviet Union, where he was able to capture even more dire poverty: 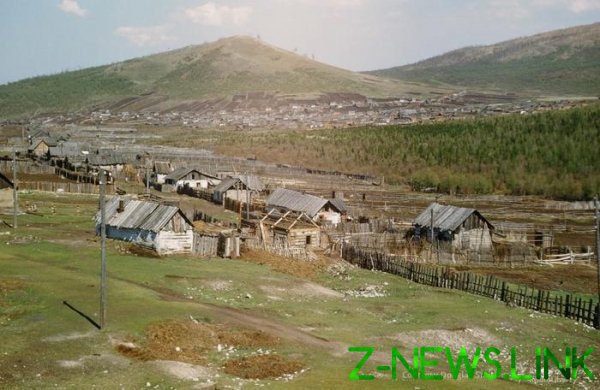 As you can see, even the capital of the “great Soviet Empire of Stalin” looked quite unattractive, and its population lived is rather poor — even by the clothes of the townspeople and the appearance of the streets. The question arises — and who has been do we need the scoop? Who has he made better, richer, kinder? From the Stalinist Empire in the end left only the fear and poverty — that was all her legacy…