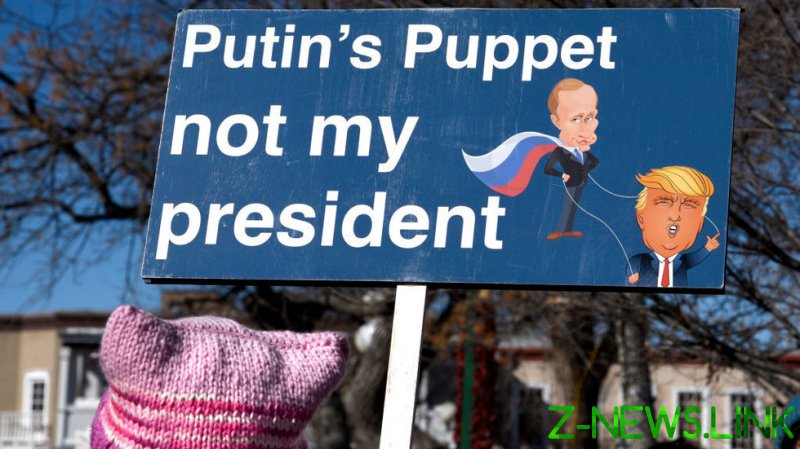 Danchenko, a former researcher at the liberal Brookings Institution think-tank in Washington, was arrested on Thursday by the FBI and charged with five counts of making false statements. According to the indictment originally filed under seal on November 3, Danchenko lied multiple times about contacts with Russian national Sergei Millian, and denied speaking with an unnamed public relations executive with Democrat ties, who turned out to be feeding him information to include in the infamous dossier.

Danchenko was released on a $100,000 bond and ordered to surrender his passport and not leave the Washington, DC area.

This is the third indictment so far in the probe led by special counsel John Durham, a career federal prosecutor tasked with digging into the FBI investigation of candidate and later President Donald Trump over Democrat allegations that he had ties to Russia.

The so-called “Steele dossier,” authored by former British spy and FBI informant Christopher Steele, was used by the FBI to secure warrants to spy on Trump via campaign aide Carter Page, well into his presidency. It was also chiefly based on information passed on by Danchenko, as it later emerged.

The indictment itself is not evidence, and Danchenko is presumed innocent until proven guilty. The claims in the document, however, have been described as “bombshell stuff” by multiple analysts.

In addition to alleged lies about meeting or talking with people, the indictment also says Danchenko lied about staying at a Moscow hotel in June 2016. This stay is when he supposedly spoke to staff and fed Steele rumors that served as the basis of the dossier’s claim Trump had paid Russian prostitutes to urinate on him in the same bed where former President Barack Obama once slept. Steele claimed that Russian spies had the video of the alleged encounter, which made for “kompromat” they could use to control Trump.

There was never any actual evidence for any of this, but with the federal prosecutors now saying Danchenko didn’t make it to the said hotel until October 2016, the speculation he fed Steele is even more suspect.

Multiple false statement charges deal with Danchenko’s claims to have spoken with Millian, who allegedly told him about Trump-Russia ties. Millian has insisted that this never happened, and proclaimed his vindication on Thursday, citing the indictment.

Another charge is related to an unnamed PR executive close to the Democrats. Though he is mentioned only as “PR-Executive-1,” investigative journalists have worked out a match with Charles H. Dolan of Ketchum Public Relations.

One of them arrived at that conclusion by cross-referencing the deposition of Olga Galkina, Danchenko’s school friend who was identified as one of his sub-sources last year.

Later in the day, an attorney representing Dolan confirmed he was indeed “PR-Executive-1.” His involvement sets up a chain of dominoes in ‘Russiagate’: Democrats fed information to Danchenko, who fed it to Steele, who sold it to Fusion GPS, which leaked it to the corporate media, who in turn accused Trump of “collusion” with the Kremlin.

The indictment also confirms the 2020 revelation that the FBI was aware of Danchenko’s false statements in early 2017, but continued to use the Steele Dossier as grounds for spying on the Trump presidency. The dossier was the basis of the original FISA warrant to spy on the Trump campaign via former aide Carter Page, starting during the 2016 election and continuing after Trump was sworn in.

Danchenko is the third person to get caught up in the Durham probe. The first, FBI lawyer Kevin Clinesmith, pleaded guilty to making false statements early on in the investigation. He admitted to altering evidence to make it seem Page was a foreign agent, thereby enabling the FISA application. He was sentenced to probation in January, after Joe Biden was sworn in as president.

Michael Sussman, a partner at law firm Perkins Coie – which has long represented the Democratic National Committee – was charged in mid-September, also with lying to the FBI. Sussmann allegedly pretended he wasn’t telling the FBI about the “Alfa Bank” conspiracy theory on behalf of the party or the Clinton campaign, even though he allegedly was.

Legal scholar Jonathan Turley believes Durham is “not done by a long shot” with this investigation, as Danchenko doesn’t appear to be the “apex defendant” but rather someone who might be pressured into a plea-deal to testify against others.

Turley speculated the potential targets of the probe could include Steele himself and Hillary Clinton’s general counsel and former Perkins Coie partner Marc Elias, among others.