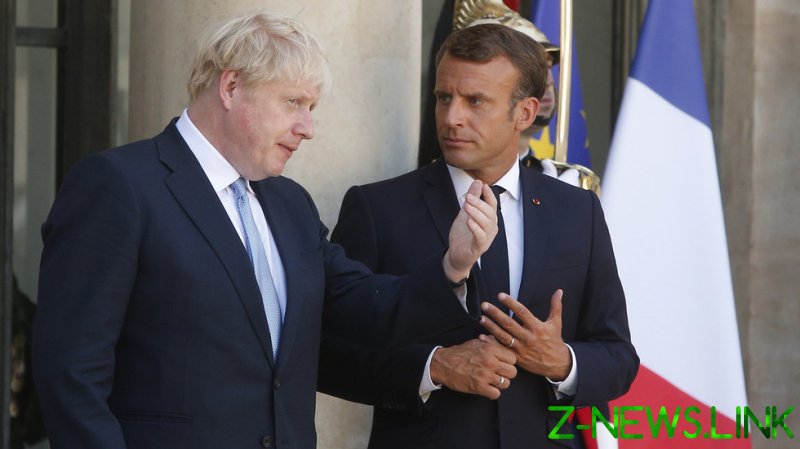 Boris Johnson rubbed salt in French wounds with his insolent “donnez-moi un break” remark on the AUKUS row that erupted after the loss of a lucrative submarine contract for Paris. And if that weren’t bad enough, Johnson’s supercilious English accent bastardizing the French language was bound to have really got the Gallic hackles up.

The British premier’s breezy appeal for France to “get over it” will only compound French rage. The loss of a €56 billion ($65 billion) contract to build a fleet of submarines for Australia is a massive blow to the country’s economy.

That loss was the salient part of the new AUKUS military alliance for the Indo-Pacific region announced last week by the US, British and Australian leaders. The French subs are to be replaced by American and British nuclear-powered vessels.

Not only that, but the economic salvo was launched by subterfuge behind the backs of the French. US President Joe Biden made an effort this week to placate French anger when he called his counterpart, Emmanuel Macron, prior to issuing a mollifying joint statement. Not Johnson, though. He smugly told Macron in Franglais to “prenez un grip.”

The British prime minister may come to rue his condescending conceit, however. In three months, France will take over the rotating presidency of the European Union, and we can be sure Paris will push the EU to take a tougher line on fully implementing the Brexit deal with Britain.

That has huge repercussions for the shaky peace agreement in Northern Ireland. Northern Ireland is one of the four constituent parts of the United Kingdom, along with England, Scotland and Wales. If the 1998 political settlement to a historic conflict breaks down, that will impact the entire UK, as it did before, during nearly three decades of sectarian violence, international shame, and bombs ripping through London and other cities.

The European Union this week warned that it wants full implementation by the end of this year of the Brexit deal Britain signed up to. While Britain officially exited the EU at the start of this year, London has still not honoured its commitment to the so-called Northern Ireland Protocol. The protocol was negotiated to prevent the return of a physical land border between Northern Ireland and the Republic of Ireland, which is a member of the EU.

The trouble is, Johnson and his Brexit government seem to have realized in hindsight that such an arrangement makes a mockery of the United Kingdom’s pretensions of constitutional unity. Part of the British Union, Northern Ireland, effectively remains an integral part of the EU and, in many practical ways, Ireland has become a unitary state – something Johnson’s Conservative and Unionist party is supposed to wholeheartedly oppose.

This situation has inflamed the Brexit jingoists and their ‘Global Britain’ ambitions, as well as a pro-Union population within Northern Ireland who feel the sea border undermines their claims of Britishness.

Britain’s Brexit negotiator, Lord David Frost, has rebuked the NI Protocol as “absurd.” Well, maybe it is only absurd because London keeps insisting, with colonialist hubris, that it has jurisdiction over a part of Ireland, which is at the heart of the problem. If Ireland were an independent united state, as many nationalists want, then the Brexit conundrum would be obviated.

Since the beginning of this year, the British government has delayed implementing the Brexit protocol for establishing regulatory customs controls in the Irish Sea. London says the additional administration is too onerous and too expensive. There are even concerns that Northern Ireland may be cut off from supplies of food and medicines from Britain, owing to the difficulties in transporting them through a new border regime.

Pro-British factions in Northern Ireland have threatened a renewal of violence if the Brexit protocol is not scrapped entirely. Ditching the protocol is something the Johnson government is also calling on the EU to do. There is a sneaking suspicion that London is exploiting the threat to the peace deal in Ireland in order to gain leverage over the EU to relent. But if Brussels were to do that, then it is undermining its own single market integrity by allowing British exports to flow into the Republic of Ireland and beyond.

What has not helped resolve the dispute is the high-handed approach of Johnson’s government. It has unilaterally postponed the implementation of the protocol by invoking “grace periods” allowing trade between Britain and Northern Ireland to go on without the full inspections mandated by the agreement with the EU.

London is demanding the EU scrap the sea-border idea. And if it doesn’t comply, then the British are threatening to trigger Article 16, allowing them to abrogate the protocol. That will, in turn, surely mean the EU insisting on a land border in Ireland – at which point, the peace settlement that has kept violence in Northern Ireland and the rest of the United Kingdom at bay for over two decades will be in serious jeopardy.

The Brits have adopted a hardball position over Brexit. If London showed compromise and lived up to its legal commitments, then some workable arrangement might have been feasible. But Johnson’s latest snub towards France over AUKUS has not only sunk a French submarine contract. The ill will engendered with France and the rest of the EU is aiming a torpedo at peace in Ireland, with all the dangers that also poses to the rest of Britain.

However, it’s complicated. US President Biden, who has strong Irish heritage, has laid down a red line to Johnson not to endanger peace in Ireland. A potential trade deal with the US is at stake. In which case, the hapless Johnson may well end up bowing and scraping, and begging, “Donnez-moi un break… s’il vous plaît.”