How do you do, fellow kids? Biden White House leaves followers baffled after tweeting out-of-touch meme with Canadian PM 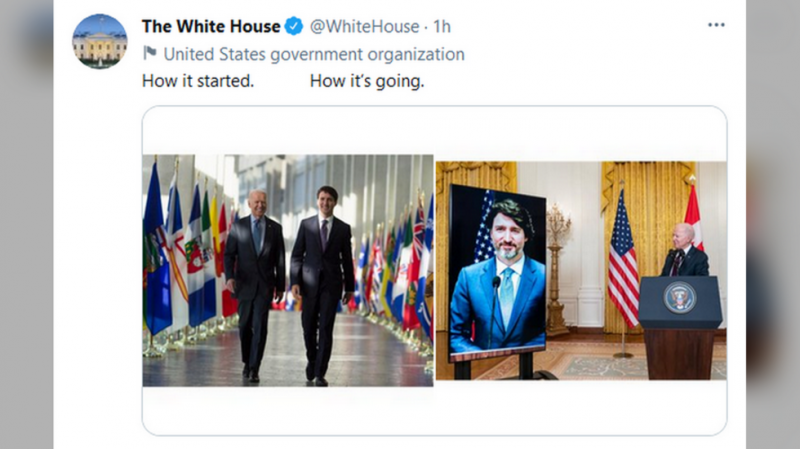 Biden’s White House Twitter account posted two images in a row captioned “How it started. How it’s going” on Wednesday. The first showed Biden and Trudeau walking side by side down a hallway lined with flags, apparently from Biden’s term as Vice President under Barack Obama. The second featured a large screen on which Trudeau was projected, with Biden turned towards it, seemingly in mid-speech, clearly taken during the pandemic.

It’s not clear what message Biden was trying to send with the meme, which – if interpreted in the typical way – suggests that Biden talking to the larger-than-life Trudeau represents a deterioration of relations. The meme began life as a way for people to sum up the arc of their romantic relationships, but shortly after its arrival became used almost exclusively in a sarcastic manner.

Social media commenters were unsurprisingly confused, unsure what they were supposed to take away from the baffling meme.

Some opted to deliver what they felt was a more accurate assessment of the Biden presidency.

Others had more pointed comments along the lines of what Biden should actually be doing beyond fluffing the Canadian PM. “You tweet a lot for someone that owes me $2,000,” one Twitter user reminded the US president

Some Biden and Trudeau fans tried to squeeze something positive out of the inscrutable meme.

Though even the Biden-loving media establishment couldn’t quite swallow the cringe.