‘How dare he!’ Critics aghast as Trump makes surprise visit to ‘great patriots’ outside hospital 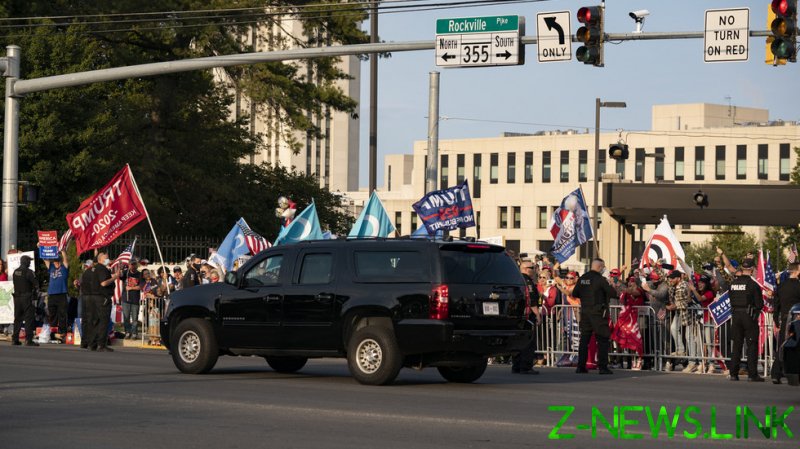 “He still does not seem to understand the seriousness of a highly contagious and deadly disease,” CNN’s Maeve Reston wrote, calling the incident a “photo op.” She went on to call the White House’s handling of Trump’s Covid-19 diagnosis and subsequent treatment “a textbook example of how not to handle a deadly virus.”

The White House press pool was already cranky on Sunday, after Trump’s doctors and his chief of staff, Mark Meadows, gave apparently conflicting information on the president’s condition on Saturday and failed to disclose that he had been treated with supplemental oxygen on Friday.

Sunday’s press briefing was more detailed, but reporters were hit with what CNN called “jarring” information: statements by Trump’s doctors saying his condition was improving to the point that he will be released from the hospital as soon as Monday.

READ MORE: Trump was given oxygen ‘for about one hour’, but could be discharged from hospital as early as Monday, president’s physician says

But the real kicker was Sunday’s late-afternoon visit to a large crowd of demonstrators who had gathered outside the hospital to show their support for the president. Trump tweeted a video from Walter Reed saying he wanted to “pay a little surprise” to the “great patriots” out on the street.

A black Chevrolet Suburban carrying Trump passed close to a security fence, behind which supporters waved flags and cheered for him. Trump, wearing a mask, waved to the crowd from inside the vehicle as he passed by.

The White House Correspondents Association complained that it was “outrageous” for Trump to leave the hospital without a “protective pool present to ensure the American people know where their president is and how he is doing.”

The press corps was ridiculed in response, with conservative author Mike Cernovich tweeting: “Media be like 1. We have all these anonymous sources. We know what’s up. 2. How dare Trump leave without telling us.”

Other observers blasted Trump for endangering staff, including the Secret Service agents who are assigned to protect him.

“Every single person in the vehicle during that completely unnecessary presidential drive-by just now has to be quarantined for 14 days,” said Dr. James Phillips, disaster medicine chief at George Washington University Hospital. “They might get sick. They may die for political theater.” The same doctor tweeted on Sept. 9 that Trump “has a duty to resign.”

Another Twitter user said Trump “endangered every in that car to get a little attention from his magats.” But as journalist Cassandra Fairbanks pointed out, those same agents may have already been around Trump in the past week, as the president still has Secret Service protection during his quarantine, so they were not further exposed to risk.

Trump’s latest move debunked“72 hours of media hoaxes,” Cernovich said. Following a barrage of stories suggesting that the president’s health was much worse than had been admitted by his doctors, the media has now been put in an awkward position.

Meanwhile, former UKIP leader Nigel Farage noted that no other Western leader would have made such a visit to the crowds outside his hospital. “This is why the American people love Trump,” he said. “He will be back better than ever.”