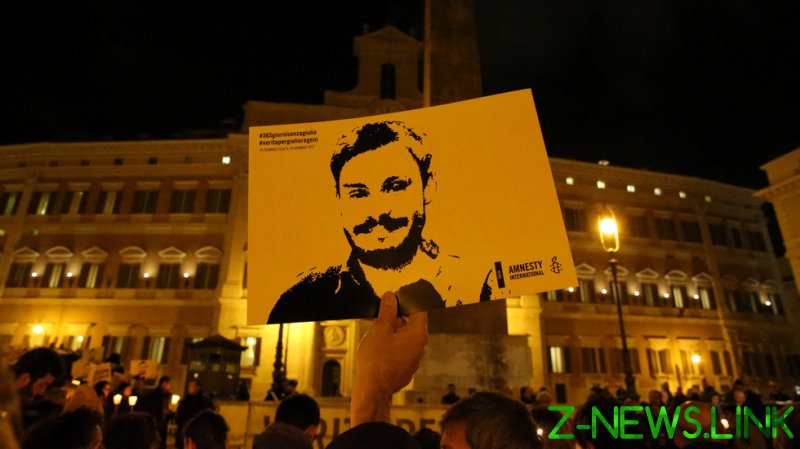 The mysterious death of Cambridge University researcher Regeni has more twists than the fusilli pasta of his native Italy, and the long-awaited trial of four Egyptian secret service agents accused of his kidnap and murder has been beset by even more drama.

Preliminary hearings in the trial of Tariq Saber, Aser Ibrahim, Hesham Helmi, and Magdi Abd al-Sharif – due to start on Thursday morning after five years of investigation – were brought to an abrupt halt when one of the defence team was forced into quarantine by Covid-19 exposure. A frustrating start, and the trial is now rescheduled for May 25.

While the unforeseen procedural snafu was an inconvenience, more sinister moves were afoot to scupper justice with the sudden appearance of a slick, 50-minute video entitled The Story of Regeni on Facebook and YouTube – a clumsy attempt at misdirection at the start of proceedings looking for the truth about the death of the 28-year-old Regeni.

Narrated in Arabic and subtitled over a spy-thriller soundtrack, the narrator adopts a conspiratorial tone throughout as he paints a picture of the doctorate student as a Western spy, with links to the Muslim Brotherhood, who was trying to foment trouble among the recently unionised street vendors he was researching.

From the outset, Regeni’s internationalism is considered due cause for suspicion. The narrator describes how upon his arrival at his Cairo apartment, “he makes himself a cup of American coffee to remember his many travels to Thailand, Britain, Turkey… and Israel”.

Never has tourism – or drinking coffee – sounded so cloak and dagger.

The fake doc introduces the theory that something is very odd about an Italian with a BA in Arabic and Political Studies from a British university researching in Egypt. The question ‘Who sent him?’ is posed again and again by useful idiots such as Italy’s former chief of staff of the Air Force, Leonardo Tricarico, and ex-minister for communications Maurizio Gasparri.

Condemning their involvement in the making of the film, the president of the Parliamentary Commission of Inquiry into the death of Giulio Regeni, Erasmo Palazzotto, said, “It is very serious that Italian political and military exponents have lent themselves to this ignoble operation… Gasparri has discredited not only Regeni but his own country.”

One of those interviewed in the documentary, former Italian defence minister Elisabetta Trenta, has expressed horror at the deceit. She believed she was helping with a documentary on diplomatic and economic relations between Italy and Egypt.

Regretting her involvement in “this shameful crap,” she told La Stampa newspaper, “If I had known that my interview would have ended in a documentary that I consider shameful and unacceptable, of course I would never have given my consent.”

The fake documentary makes no attempt to find out who killed Regeni, but it does look to exonerate Egypt’s National Security Agency (NSA) from having had anything to do with the murder, despite the fact that on the night he disappeared, the researcher was seen in a Cairo police station and the National Security Agency headquarters by two separate witnesses.

It is suggested that when his body was found nine days later, on February 3, 2016, alongside the Cairo/Alexandria Desert Highway and just a kilometre from NSA headquarters, that the very proximity should discount intelligence involvement. The argument is, ‘What sort of security agency would dump the half-naked corpse of a foreigner bearing clear signs of prolonged torture on its own doorstep?’

One answer that makes sense was found in a document sent to the Italian embassy in Switzerland, which claimed Egypt’s Military Intelligence and Reconnaissance agency murdered the researcher, then left Regeni’s body near the HQ of its rival NSA in a bid to embarrass and discredit it as part of an ongoing internecine feud between the two agencies. A military blanket was found near the body.

Further on, the video also indulges in a lengthy trashing of the way that Rome tackled its part of the probe, although the reality is that both Italians and Egyptians were suspicious of each other and what secrets each might unearth. The ill-feeling and distrust that grew over the last five years is why Egypt failed to hand over the four suspects, refusing to recognise the Italian legal process. The men, all still serving NSA agents, will be tried in absentia.

The fake doc ends with a very clear message; the outcome of the trial of four intelligence agents could have serious consequences for Egypt-Italy relations. And this is where to look for clues to the identity of the filmmaker. Because when you talk about Egypt and Italy, you are talking about Italian energy giant Ente Nazionale Idrocarburi (ENI). You are talking about ENI’s huge Zohr gas project off Egypt’s northern coast, the new oil wells it has just drilled in the Western Desert and the crucial links between Cairo and the government-backed ENI, the key to energy-vulnerable Italy’s needs.

ENI boss Claudio Descalzi raised the matter of Regeni’s death with the Eygptian President Abdel Fattah el-Sisi on at least three occasions, and was rumoured in the New York Times to have enlisted the help of the Italian intelligence services to resolve the case.

However, in a classic display of backing both horses, he also replied to a bid from Amnesty International to put pressure on Egypt with a letter assuring it that “competent authorities are making every effort to find the answers that the Regeni family is waiting for: important answers for us too, because respect for each person is the basis of our work and because we are committed to the development of Egypt.”

I can’t be the only one who finds it strange that a business titan should busy himself with the murder investigation of a doctorate student in a foreign land and then note that, not to put too much polish on it, the whole matter was bad for business.

Because that was the exact same point that the mysterious documentary was making. And while the pressure imposed on the investigation into the brutal torture and murder of an innocent university researcher from Italy ultimately undermined efforts to seek the truth, at least in one respect the Italian and Egyptian governments are on the same page.

To a cynic, their goal is clear. Let’s get this unfortunate Regeni matter over and done with through a high-profile show trial featuring none of the guilty men and then get on with the important stuff, like making money.

And in the meantime, get those video nerds to churn out some propaganda to hammer home the message. Surely, it can only help.