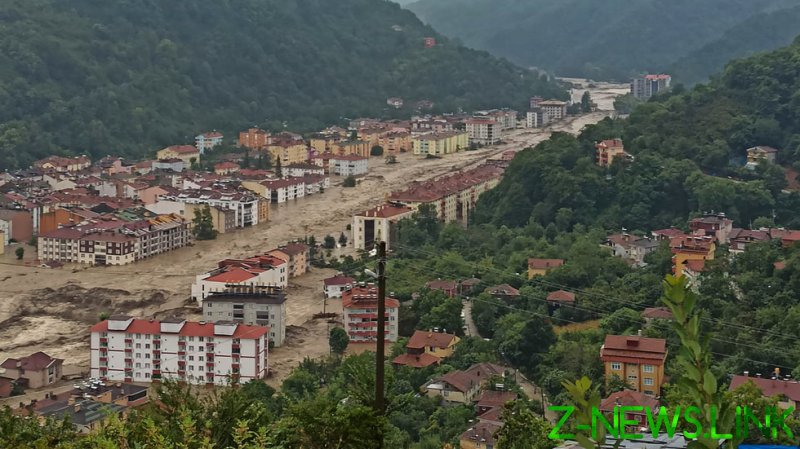 Unusually heavy rainfalls in the Turkish provinces on the Black Sea coast led to major flooding on Wednesday, with torrents of water and sludge rushing through the streets of cities and towns in the regions of Bartin, Sinop and Kastamonu.

At least one person died from a heart attack amid the flooding in the Bartin province and one more person was declared missing, according to local media reports. However, the fate of others remains unclear as the Turkish rescue services are still trying to find their way through the wreckage left by the floodwaters and reach villages cut off by the disaster.

In Bartin, flash floods demolished several houses and caused at least two bridges to collapse, as well as destroying a road leading to the neighboring province of Karabuk.

Sections of roadway in Karabuk were also ruined by the floods. Up to 20 people are feared trapped in their houses in the region, according to Turkish media.

Emergency workers rescued at least 15 people trapped in their homes or vehicles in the various provinces affected by Wednesday’s deluge and flooding, the Anadolu news agency reported.

Videos shared on social media showed streets of the northern Turkish cities becoming turbulent rivers, sweeping away cars. One video showed an entire street jammed with a huge pile of debris that included fallen trees and vehicles carried away by the torrential flows.

In some places the floods were so powerful they smashed bridges and devastated roads, turning them into sludge-filled gorges.

Elsewhere, the torrential streams rapidly filled basements and flooded the ground floors of numerous buildings, trapping people inside. “Within 10 minutes, everything was flooded,” local restaurant owner Nuri Ersoz in the town of Bozkurt told the Turkish Halk TV.

Interior Minister Suleyman Soylu, who traveled to the Kastamonu province, said that waters surged “three or four meters high” in some places and many people are still waiting to be rescued from the rooftops. “Evacuations and search-and-rescue efforts are continuing,” he said.

The Turkish Defense Ministry announced that two AS-532 type multipurpose helicopters were deployed to the affected areas to aid the rescue efforts. Authorities warned that the Black Sea region will be exposed to further rainfalls on Wednesday. Warnings alerting people about floods and landslides have been issued in nine northern provinces, including the already affected Sinop, Kastamonu and Bartin.

The developments come as Turkey also battles massive wildfires in its southwestern provinces. Huge fires devastated large swathes of land there, even threatening a local power plant at one point. The proximity of the blaze to the plant triggered an evacuation but the emergency services eventually managed to bring the situation under control.