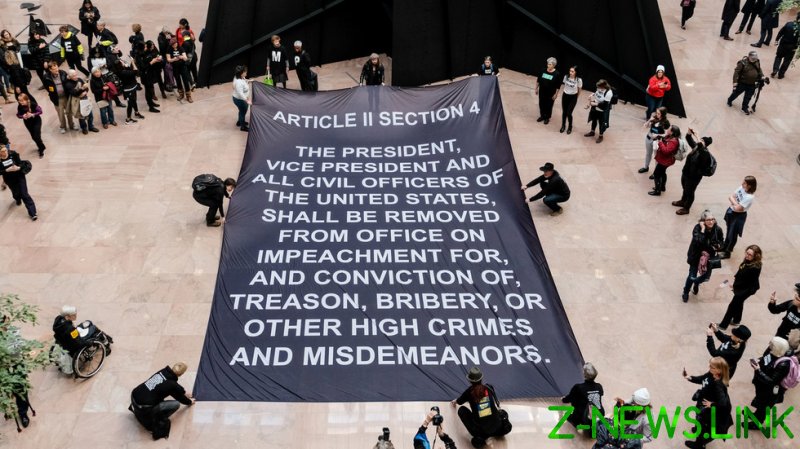 A four-page draft of the impeachment resolution, published by CNN on Friday afternoon, accuses Trump of “incitement of insurrection” over Wednesday’s events, when a crowd of his supporters broke through the police barriers and entered the Capitol as the joint session of Congress met to certify the election results.

In a call with Democrats on Friday, House Speaker Nancy Pelosi (D-California) said she preferred if Trump would resign or be removed from power by Vice President Mike Pence and the Cabinet through invoking the 25th Amendment, but that impeachment was an option.

Pelosi reportedly said support from Democrats for impeachment was greater now than in 2019, when the House voted to impeach Trump over his phone call with the president of Ukraine, but the Senate voted to acquit.

This time, Democrats may be expecting enough Trump critics among Senate Republicans would cross the aisle and support them. Only Mitt Romney (R-Utah) voted with them back then, and only on one count.

House Republicans have urged Pelosi against the move. Minority Leader Kevin McCarthy (R-California) said that impeaching Trump “with just 12 days left in his term will only divide our country more.” McCarthy said he “reached out to President-elect Biden today and plan to speak to him about how we must work together to lower the temperature and unite the country to solve America’s challenges.”

A similar statement came from White House deputy press secretary Judd Deere, who said a “politically motivated impeachment against a President with 12 days remaining in his term will only serve to further divide our great country” and that Trump himself said “this is a time for healing and unity as one Nation.”

House Intelligence Committee Chair Adam Schiff (D-California), who led the first impeachment push, reportedly had reservations about this one, telling the caucus it would create the perception the Democrats were trying to protect Biden by preventing Trump from running again, and that the process might be “awkward” for the new president’s plans to unite the country. A new impeachment would present a “messaging challenge” for the Democrats, Schiff said according to CNN’s sources on the call.

According to his official statement, however, Schiff insisted Trump should “leave office immediately, through resignation, the 25th Amendment or impeachment.”

“Every day that he remains in office, he is a danger to the Republic,” Schiff said.

Democrats are planning to formally introduce the impeachment resolution on Monday and fast-track a vote next week, CNN and NBC reported.

Following Wednesday’s events, which he condemned, Trump announced he would peacefully transfer power to Biden – but would not attend his inauguration.