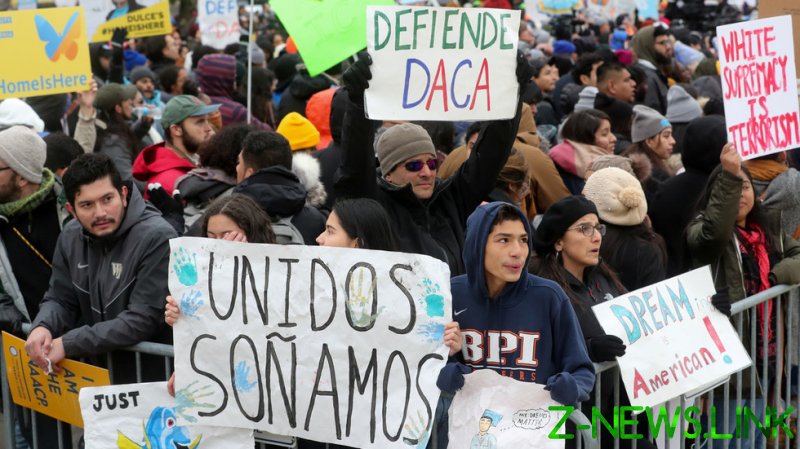 Biden and Harris “expressed their strong support for including immigration reform in upcoming reconciliation legislation to enable Dreamers, TPS recipients, farmworkers and essential workers to gain long-awaited pathways to citizenship,” the White House announced on Friday, following a meeting with a group of Democrat lawmakers the day prior.

‘Dreamers’ is a reference to people brought to the US illegally as children, some 800,000 or so of whom were shielded from deportation since 2012 by President Barack Obama’s Deferred Action for Childhood Arrivals (DACA) program. TPS stands for “temporary protective status” and was intended to shield from deportation people who sought refuge in the US from natural disasters, wars and other calamities in their homelands, until it was safe to return.

The reconciliation legislation is a process by which Democrats hope to ram through their budget and infrastructure agenda in the evenly divided US Senate, without any Republican votes.

Furthermore, a provision in the legislative appropriations bill, approved Wednesday by the House of Representatives in a 215-207 vote, would allow DACA recipients to be hired as Congressional staff.

“I am also pleased that we are helping ensure our workforce reflects the diversity of our nation, including by increasing funding for paid internships and allowing DACA recipients to work in the halls of Congress” and other legislative branch agencies, said the bill’s sponsor, Rep. Tim Ryan (D-Ohio).

Former President Donald Trump attempted to revoke DACA as unconstitutional, but the US Supreme Court blocked the effort last June, claiming that his administration’s efforts to do so ran afoul of the Administrative Procedures Act. Last month, a federal judge ruled that DACA itself violated the APA and blocked all further applicants to the program, but allowed those currently protected under it to maintain their status.

Democrats have long advocated amnesty for millions of illegal immigrants to the US, focusing on ‘Dreamers’ and arguing it would be cruel to deport them to their countries of origin, as they have known no other home their entire lives.

On Monday, however, one DACA recipient was granted permission to represent Guatemala at the Tokyo Olympics and return to the US without losing his status.

“Even though my roots started in Guatemala, in some ways I feel as American as anybody else who was born here,” Luis Miguel Grijalva wrote on Instagram, complaining that DACA “takes away my freedom of ever leaving the country and be able to come back in.”

Another group is seeking to hop onto the amnesty bandwagon as well: children of mainly Indian and Chinese tech workers, whose parents came to the US on non-immigrant H1B work visas. These 200,000 or so “documented dreamers” have gained an influential ally in Rep. Ro Khanna (D-California), who recently argued that DACA benefits should be extended to this group.

“We must not leave these young people and their valuable contributions to our communities behind,” he wrote.

Meanwhile, hundreds of thousands of migrants – from all over the world – have been detained crossing the southern US border from Mexico illegally. The Biden administration has officially called for migrants not to come in, citing the ongoing coronavirus pandemic, but has also systematically unraveled almost all of its predecessor’s immigration and border control policies over the past six months.