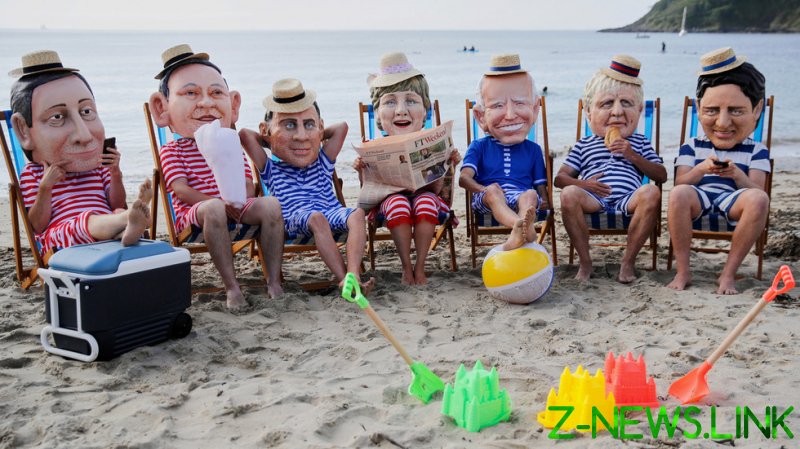 Many onlookers expected the G7 summit in Carbis Bay, Cornwall to be a big reset for the West. A chance to show that, after the tumultuous period of Brexit, Trump and the devastating coronavirus pandemic, the leaders of the biggest democracies on the planet had put all that behind them and were ready to take on the climate, vaccines for the world and an increasingly troublesome China.

And while those issues were addressed, what dominated the summit was the weeping sore of Brexit, the ridiculous ‘sausage wars’ that bedevil the chances of the UK and the European Union ever reaching final agreement on the British decision to leave the trading bloc.

Fundamental to the row, it came to light, was a European misunderstanding of British geography, with President Emmanuel Macron apparently under the impression that Northern Ireland and the UK were different countries.

He reportedly needed to be set straight on this by Bojo at Saturday night’s beach barbecue – social distancing, whassat? – but Foreign Secretary Dominic Raab said it wasn’t just the French suffering this misperception, it was widespread among EU leaders and it was “offensive”.

This helps explain why we have got to this point, if those involved in the negotiations don’t even know what country they’re talking about.

And while the spat bubbled along, it seems good ol’ President Joe Biden and the Irish Taoiseach Micheal Martin had come up with a plan involving a Sanitary and Phytosanitary (SPS) Measures deal that would eliminate 80% of the checks currently sought by the EU on goods crossing the Irish Sea from the UK.

At the risk of upsetting those geniuses involved in the past five years of talks around this thorny issue, why didn’t they think of the SPS route first? Instead, we have Biden and Martin jointly pulling a rabbit out the hat while the rest of the crowd stare on slack-jawed in wonder.

With no skin in this game, Japanese Prime Minister Yoshihide Suga must be hoping his preparedness to sit through this torture will be reciprocated by his new buddies showing a readiness to run the Covid gauntlet for the opening ceremony of the Tokyo Olympics scheduled for just over a month’s time.

There should be no excuses – after all, at Saturday night’s barbie, face masks were ditched, along with social distancing for a select group numbering far beyond the current UK allowance of just 30 people. Hey-ho. World leaders make the rules and it seems they can break the rules too.

Amid all this bickering, there was still time for the bigger issues, and top of those was China. With Biden in the Oval Office, it seems he is bringing more to this debate than a bagful of swingeing tariffs, and the big plan was to out-China China by offering receptive nations more than they might expect from the Belt and Road Initiative.

The initiative is China’s global goodwill policy aimed at providing finance to build railways, roads, ports and even sports stadiums in nations across the world – albeit at a price. Many of its efforts have been branded as debt diplomacy.

Now, the G7 leaders are saying they’re prepared to pull the same trick and likewise claim it’s a force for good. The only problem is it’s not quite clear who’s going to pick up the bill. Germany? USA? Anyone? Hello…?

Needless to say, China was quick on the rebuttal, warning that gone were the days of a “small” group of nations dictating terms to the rest of the world that “world affairs should be handled through consultation by all countries”.

It’s funny that the Chinese Embassy in London should raise that point, because, tomorrow, the international leaders roadshow heads to Brussels for a meeting of NATO allies. And top of their agenda there is China once again, with Biden expected to press the Europeans to commit to a tough statement aimed at thwarting further Sino/Russian joint military operations in the region, which have been unnerving some NATO members.

The West can barely afford to take a breath before Tuesday’s big show in Geneva, at which President Biden is to meet Russia’s President Vladamir Putin for a cosy bilateral chat.

Forgotten will be the Cornish sunshine, the talk of sausages, and the never-ending Eurocentric obsession with Brexit – there is much more to talk about, and on issues that mean a helluva lot more to the wider world.

With Johnson having prepared the stage and Biden having shown himself willing to step up on key issues, maybe we can hope that the next few days will offer some sort of consensus on the way ahead both for the West and those it has found problematic to deal with.

China. Russia. Turkey. It’s not a long list. But now is the time to make progress and to make a difference. The world is watching.