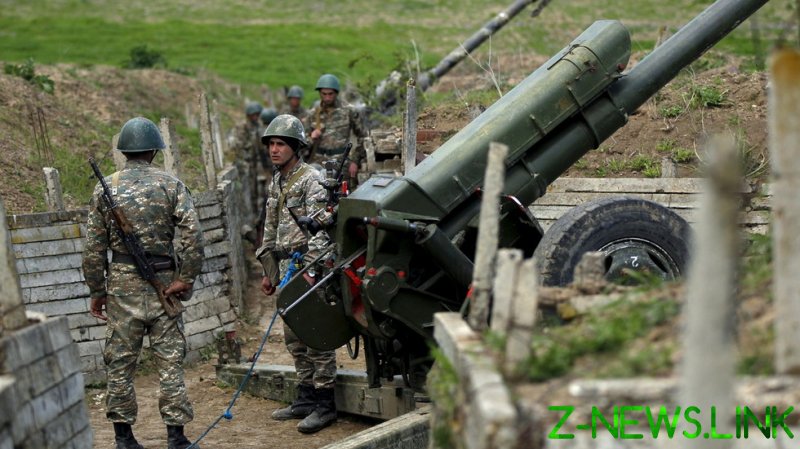 Hostilities resumed along the Nagorno-Karabakh border earlier on Sunday, with top officials in both Armenia and Azerbaijan confirming the news.

“The enemy has started an attack on Artsakh,” Armenia’s prime minister, Nikol Pashinyan, told his Facebook audience, referring to the Armenian name for the territory claimed by Azerbaijan. Nagorno-Karabakh forces “successfully repel the attack,” and the situation is under control, he said.

Separately, Azerbaijan’s Defense Ministry said the military has launched “a counteroffensive operation along the entire front” in a bid to safeguard civilians and contain Armenian forces. The counterattack involves infantry and armored units supported by the air force, Baku says.

As the crisis unfolded, top officials in Baku reported Armenian forces have been shelling Azerbaijani Army positions and populated areas, a claim Yerevan is yet to confirm.

Leaders of Nagorno-Karabakh said Stepanakert, the region’s largest city of over 55,000 people, has also been hit by Azerbaijani artillery. “We urge the population to remain calm and take cover,” a spokesperson for Nagorno-Karabakh president wrote on Facebook.

There were conflicting casualty reports from both sides later in the day. Azerbaijan’s military confirmed that a combat helicopter was shot down but that its crew survived, adding there have been an unspecified number of victims among civilians. It also claimed 12 Armenian air defense systems were hit and destroyed.

Meanwhile, the Armenian Army insisted the Azerbaijani losses were much higher, amounting to two helicopters, three tanks, and three drones. “The enemy sustained casualties in manpower,” Shushan Stepanyan, the spokeswoman for the Armenian Defense Ministry, stated.

Armenia and Azerbaijan have been sworn enemies since gaining independence in the 1990s. The focus of their conflict is Nagorno-Karabakh, a predominantly Armenian region landlocked inside Azeri territory, which Baku considers to be under its sovereignty and Yerevan treats as an independent friendly nation.

The latest major flare-up between Armenia and Azerbaijan happened in April 2016, when the nations fought for four days and deployed heavy weapons, including tanks and aircraft. The battles claimed the lives of over 90 troops on each side and killed over a dozen civilians.