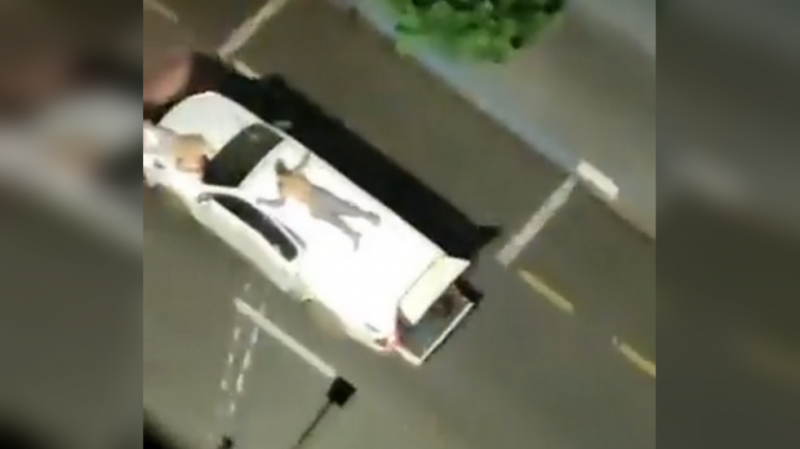 The small Brazilian city of Aracatuba, located in the most-populous state of Sao Paulo, turned into a battle zone overnight, as a group of some 20 armed robbers rode in to hit multiple banks at once. The group used around 10 cars during the heist, according to Alvaro Camilo, Executive Secretary of Sao Paulo’s military police.

The heist turned extremely violent as the group made their escape, producing scenes akin to a MadMax movie scene. Footage circulating online shows getaway vehicles with half-naked hostages tied to car hoods and roofs, riding through streets while multiple gunshots can be heard in the background.

Another video shows several armed men clad in military-style gear – apparently the assailants – using a chain of four people as a human shield as they engage in a firefight with unseen adversaries.

The group used various sophisticated equipment, including drones, to monitor the streets during their escape, the military police said. The criminals also blocked streets with burnt cars and littered them with explosive booby traps. At least one passerby was struck by the explosives and has had his leg amputated.

The raiders engaged in two separate firefights with law enforcement across the city. While most of the group escaped, two suspects have been arrested. The violence has left at least three people dead, including two civilians and one suspect, the military police said. The total value taken in the various robberies was not immediately known.