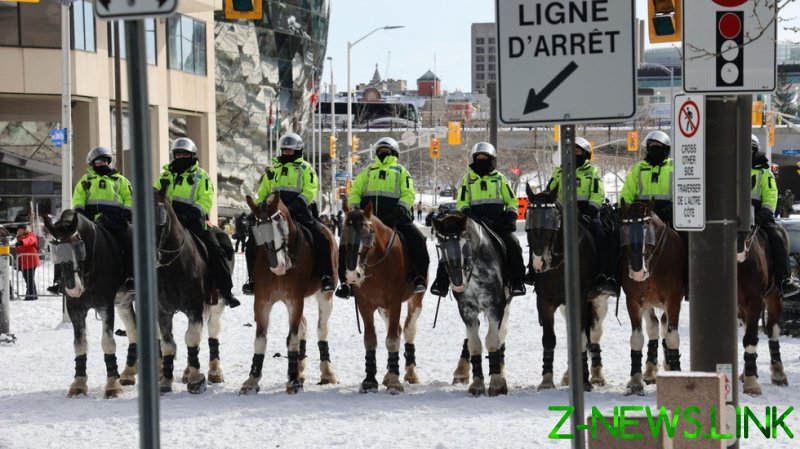 Authorities responded to public outrage after mounted officers charged into the crowd of protesters in Ottawa on Friday, assuring Canadians that “no one has been seriously injured or passed away” during the incident.

After several viral videos showed mounted police seemingly trampling at least two people – including an elderly lady with a walker – as authorities tried to break up the Freedom Convoy demonstration, Ottawa Police released a statement claiming neither man nor horse were injured in the incident.

“We hear your concern for people on the ground after the horses dispersed a crowd. Anyone who fell got up and walked away. We’re unaware of any injuries,” police said in a statement on Twitter.

Authorities further claimed that “a bicycle was thrown at the horse further down the line and caused the horse to trip,” adding “The horse was uninjured.”

Footage of police violence against protesters on Friday sparked public condemnation, including from elected Canadian officials who said they were “disturbed and saddened” by the “authoritarian, military style measures” used by police against “peaceful protesters.”

The Canadian government led by Prime Minister Justin Trudeau, has accused protesters – who have been demonstrating against Covid-19 restrictions and mandates outside Parliament since late last month – of attempting to overthrow the government. Trudeau invoked emergency measures to deal with the protesters this week.