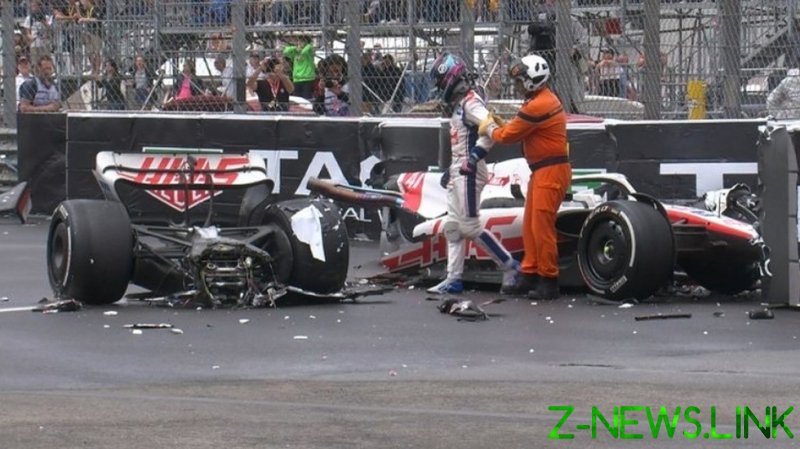 Mick Schumacher was forced to retire from the Monaco Grand Prix after a gruesome crash saw his Haas vehicle split in half.

The son of record seven-time world champion Michael Schumacher had just passed the swimming pool in the final section of the famous marina track when he lost control of his car in wet conditions on Lap 28 then spun out of control into the barriers.

Such was the impact of the collision that the back of the German’s vehicle was ripped off, which caused passing rival drivers to take to the team radio and ask if he was alright.

The incident meant that the race had to be red flagged while the course was cleared of debris and the barrier was repaired.

Thankfully for Schumacher, however, he was able to walk away in one piece unlike his vehicle and make it to the medical center to be looked over.

Schumacher’s Haas teammate Kevin Magnussen, who replaced Nikita Mazepin at the start of the season, had to retire from the race too due to suffering a loss of water pressure just before the 23-year-old hit the barriers.

Though the race was delayed due to heavy rainfall, Magnussen believed it could have begun on time.

“We could have started,” the Dane complained to RaceFans.

“Of course there was then a point afterwards that was torrential rain and the race would have been red-flagged. But that’s part of racing.

“So if the conditions are okay, they should start us. Maybe give us a crash course in wet weather driving or something, we can go and take some classes,” he suggested.

Through the points he won, Verstappen remained first in the 2022 Standings with 114.

Elsewhere, Charles Leclerc is close behind him on Leclerc 110 points as Perez trails the duo with 85.