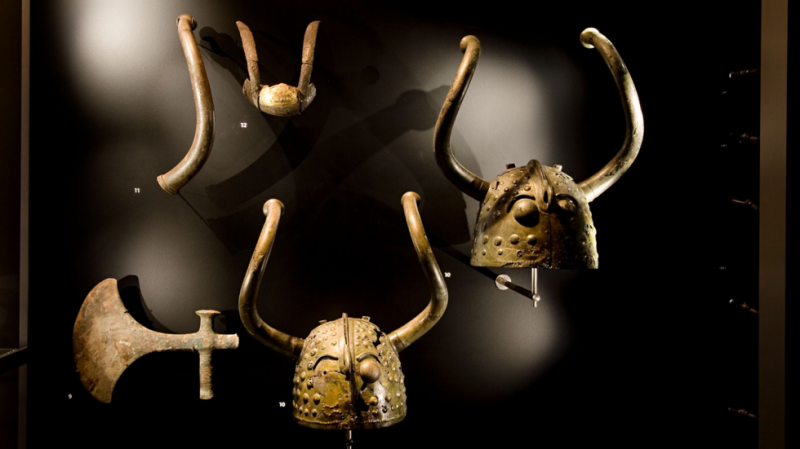 Two horned helmets discovered in a bog in the Danish town of Viksø in the early ’40s that were thought to be Viking have been found to be even more ancient – about 3,000 years old and from the Nordic Bronze Age, research suggests.

Housed in the National Museum of Denmark, they feature bull-style horns and two eye-like bulges, and appear to have allowed the attachment of decorations such as feathers and horsehair.

In 2019, the archeologist Heide Wrobel Nørgaard – one of the authors of the groundbreaking research, published in the journal Praehistorische Zeitschrift – noticed organic residue on one of the helmets. Radiocarbon analysis of it led the researchers to establish that the helmets had been placed in the bog, likely as an offering to the gods, at around 900 BC – which was about 1,500 years before the Vikings came to Viksø.

According to the research, the elaborate style of the helmets corresponds to that of artifacts from the same period found on the island of Sardinia, suggesting “their wearers wielded power, whether perceived as god, human, or something in between.” The fact that one of them was found on a tray of ash adds to the theory that the headgear had a ritual rather than military function.

The similarities of the helmets’ appearance with figurines from Sardinia have prompted the researchers to suggest that “the Bronze Age was reliant on coveted metals traded in vast amounts and often long distance, hence connecting metal-rich tracts with regions poor in metals” – a point of view supported by the “recent decades of research.”

Prior to Nørgaard and her co-authors’ study of the helmets, the only source of information on their origin had been their typology: their style and the symbols used for their decoration. Therefore, the establishment of the era when the helmets were placed in a bog, as well as the discovery of a possible, previously unknown sea route that apparently connected prehistoric Scandinavia with the Mediterranean and was “independent of the otherwise flourishing transalpine trading route” represents an exciting new chapter in historical research.