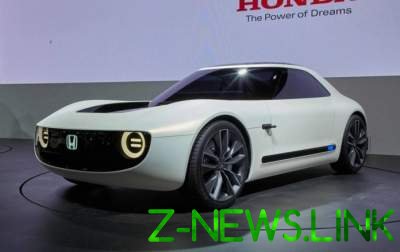 Now in the line of Honda already has a few models with electric propulsion.

Honda plans to create some more new concepts of electric cars in retro style. About this to journalists on the sidelines of the Tokyo motor show said Makoto Ono, Director of design for Honda.

“I can’t exactly tell you when we will introduce new concepts of electric cars, but we will be much more than now,” said Iwaki.

During the Tokyo motor show, Honda showed the public two concepts of electric cars in retro style — Urban EV and Sports EV. The design of the visible elements of classic cars Honda. For example, Urban EV got some design elements (note the round headlights and rounded fenders) models N600, produced in 1967-1973 and first-generation Civic. In turn, the Sports EV concept that looks more modern, has some design elements of a coupe S800 Coupe, first shown in 1965.

The “Honda” there are still a lot of classic cars, so it would be very interesting to see their modern version. Moreover, it will be electric cars, according to Makoto Iwaki.

Iwaki and his team are now developing not only new concepts of retro cars, they are also preparing a production version of the Urban Concept EV. It should be on sale in 2019. According to Iwaki, serial Urban EV will be almost identical concept, but you will get some small new elements of design. But the interior is apparently more modern than the exterior, due to the requirement to ensure the advanced technology and security systems.

See also:  In Canada, it was released electric pickup

Now in the line of Honda already has a few models with electric propulsion (Fit EV and Clarity), but none of them are still not sold in Europe.