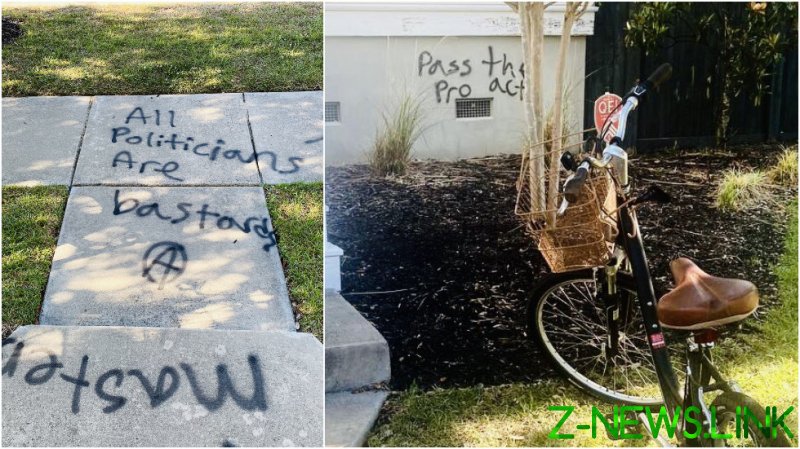 The congresswoman took to Twitter on Tuesday morning to report the incident, sharing photos of the graffiti while denouncing the vandals in a lengthy thread.

“In the early morning hours of Memorial Day, my home, where I’m raising my two children, was vandalized with Antifa symbols and profanity,” she wrote, apparently referring to an ‘A’ symbol spray painted on a walkway outside her house. “Although my kids and I are thankfully fine, these criminal acts are unacceptable no matter your politics.”

The graffiti also included two anarchist slogans, “No gods, no masters” and “All politicians are bastards,” as well as “Pass the Pro Act” – a reference to the Protecting the Right to Organize Act, legislation that would empower unions and expand labor protections, such as the right to collectively bargain.

Later on Tuesday, Mace also posted footage to YouTube showing the vandalism, where she lamented that “My kids aren’t even safe on the front porch of their own home.”

Critics met the GOP lawmaker with some skepticism, however, with author Bess Kalb even suggesting Mace fabricated the entire incident herself, claiming the rep defaced her own home while donning her hat as an amateur handwriting analyst using a sample of Mace’s penmanship found online. The writer also challenged Mace to produce doorbell camera footage she claimed was “clearly visible” outside her front door, though did not receive a public response.

Despite the allegations of a set-up, the Charleston Police Department has noted several incidents of vandalism in the vicinity of Mace’s Daniel Island home in recent weeks, according to local media. In addition to the residence, four nearby parks have also been hit by graffiti, some of which also included anarchist ‘A’ symbols and slogans in favor of Black Lives Matter.

Moreover, the incident at Mace’s home marks her second run-in with vandals over the last year, with profanity scratched into her car last October, while she was still a congressional candidate.

Mace is not the only American politician to see their home defaced in recent months, and vandals have not confined themselves to Republican lawmakers. In January, the home of House Speaker Nancy Pelosi was hit by graffiti carrying political slogans, with the culprits also leaving a trail of fake blood and a pig’s head at her garage door.

Last summer, a spree of destruction at monuments and statues around the country – many honoring Confederate generals and political leaders – prompted then-President Donald Trump to threaten 10 year prison sentences for vandals. He also established a federal task force under the Department of Homeland Security to protect the memorials, seeing agents deployed alongside local police for that purpose.