Home / WORLD / ‘Homage to hate’: Democrats cheer as statue to Confederate General Robert E. Lee is removed from US Capitol

‘Homage to hate’: Democrats cheer as statue to Confederate General Robert E. Lee is removed from US Capitol 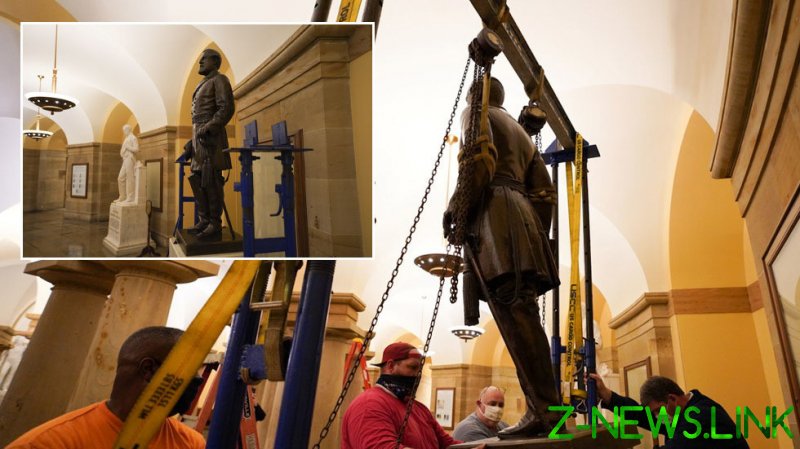 The statue was removed Monday morning by staff from the Architect of the Capitol. The proceedings were attended by Democratic members of Virginia’s congressional delegation: Senator Tim Kaine, Congresswoman Jennifer Wexton and a representative of Congressman Donald McEachin.

“The Robert E. Lee statue honors a legacy of division, oppression, and racism — a dark period in the history of our Commonwealth and our country,” Wexton and McEachin said in a joint statement. “There is no reason his statue should be one of the two representing Virginia in the US Capitol,” they added, calling the removal a “historic and long-overdue moment.”

House Speaker Nancy Pelosi (D-California) also commented on the statue being replaced, saying, “The statues within the Capitol should embody our highest ideals as Americans.” She condemned “the bigotry of the Confederacy,” adding that Congress “will continue our work to rid the Capitol of homages to hate.”

Online, however, reaction to the decision has been quite mixed.

Some argued that the statue being replaced was “erasing history,” while others wrote that it would have been better to destroy it. A few saw its removal from the Capitol as “very reasonable,” saying that no matter the historical connotations, “it should never have been there in the first place”.

Lee’s statue was one of the two figures representing Virginia in the Capitol, and the decision to take it down was made by the state’s General Assembly last week. It will be relocated to the Commonwealth’s Museum of History and Culture. The selection of a monument to civil rights leader Barbara Johns as a replacement, however, is yet to be approved.