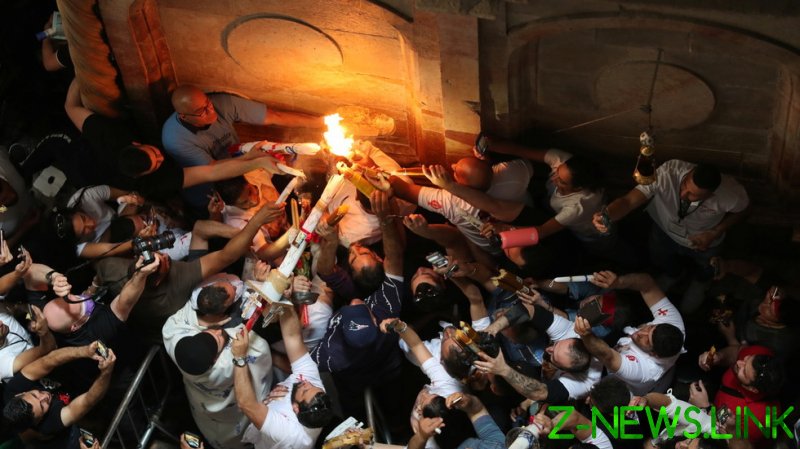 Orthodox Christians believe that once a year, blue light emits from the tomb of Jesus Christ deep inside the church. It then turns into a flaming column, which the clerics use to light candles in order to pass the fire to the pilgrims.

The ceremony, which symbolizes the resurrection of Jesus, usually gathers tens of thousands of worshipers, but in 2020, it was marred by the harsh coronavirus measures. Last year, when Greek Orthodox Patriarch of Jerusalem Theophilos III emerged from the building carrying the flame, the courtyard was largely empty, with only a few clerics in face masks and Israeli police officers attending.

This time, the ‘miracle’ was witnessed by a much larger crowd, as Israel has eased restrictions on gatherings in recent months, following a record vaccination drive which has seen more than half of the population vaccinated against Covid-19.

The Holy Fire will be flown to a dozen countries, including Russia, Greece, Ukraine, Poland, Bulgaria, and Georgia. Representatives of the Russian Orthodox Church have been waiting for the lamp with the flame at Israel’s Ben Gurion Airport to deliver it to the Cathedral of Christ the Savior in Moscow for the Easter service.

The religious holidays in the Holy Land have been overshadowed by a tragedy which occurred in Israel early Friday. A stampede at an Orthodox Jewish festival in the northern town of Meron ended with 45 dead and more than 100 injured. Sunday has been declared a day of mourning for what was one of the deadliest peacetime incidents in Israeli history.