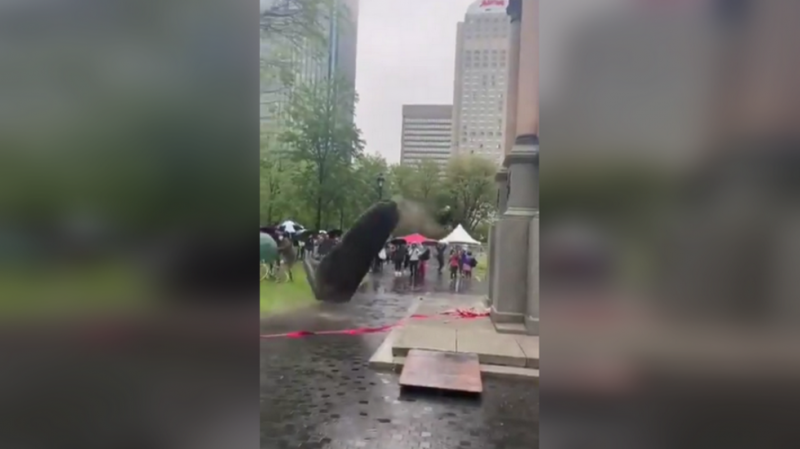 The statue’s head was broken off as it slammed to the ground from its high pedestal Saturday in Montreal’s Dominion Square. Activists were shielded from view with umbrellas and sheets as they unbolted the statue, which was pulled from behind with a strap around its neck.

Hundreds of protesters had marched to the site to call for defunding the police. They reportedly were organized by the Coalition for BIPOC Liberation, which bills itself as “a collective of social justice groups and community activists led by black and indigenous people.”

Police asked the crowd to disperse on a loudspeaker but didn’t intervene as the statue was destroyed. None of the vandals were arrested.

While the law enforcement took a hands-free approach to the toppling, it has drawn condemnation from the city mayor. Montreal Mayor Valérie Plante said that she would rather put controversial monuments “in context” rather than knock statues off their pedestals. She also suggested “adding more monuments that are more representative of the society to which we aspire.”

While some have applauded the vandalism, justifying it by Macdonald’s troubling policies towards indigenous peoples, others questioned police’s actions.

While some have praised the vandals, justifying the uprooting of the statue while citing Macdonald’s policies towards indigenous peoples, others questioned police’s inaction.

“I’m honestly appalled that this horrific violence has spread to Canada,” one user said.

“I hope that these domestic terrorists feel the full force of the law and are swiftly prosecuted.” Another described the incident as “channeling the ISIS approach to our culture and history.”

Macdonald, an immigrant to Canada from Scotland, served as prime minister from 1867 to 1873 and from 1878 to 1891. He’s ranked by historians as one of Canada’s three most accomplished prime ministers, but he has become a controversial figure in recent years. A statue of Macdonald was removed from the steps of Victoria City Hall and placed in storage in 2018, with city councilors citing the father of the Confederation’s role as “a leader of violence against indigenous peoples.”

Macdonald is faulted for championing church-run residential schools that tried to assimilate indigenous children to Western ways. Children were removed from their families and forbidden to speak their native languages in a system that critics have called cultural genocide. Many were exposed to physical or sexual abuse.