Home / business / Him and Putin discussed the situation with Sentsov

Him and Putin discussed the situation with Sentsov 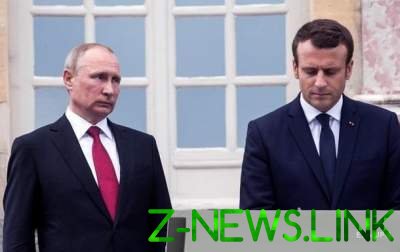 The Russian President promised to inform Him about the condition of Sentsov.

On Friday, August 10, had a telephone conversation with President of Russia Vladimir Putin with the President of France Emmanuel Macron, during which the leaders discussed the situation in Syria and “some other topic”.

About it reports a press-service of the Kremlin.

“During the exchange of views on the current situation in Syria, the leaders gave a high assessment conducted in July of this year Russian-the French operation for the delivery and distribution of humanitarian aid among the population of the Syrian province of Eastern ghouta,” the statement reads.

See also:  Unhappy with the dinner, the Russian was handcuffed

It is reported that Putin stressed the importance of continuing the international community’s assistance to restore socio-economic infrastructure of Syria, as well as the return of refugees and IDPs to places of their permanent residence.

“Touched on some other topics,” the statement reads.

As informs Agency Bloomberg referring to the statement of the Elysee Palace, Putin promised to provide the French side with information on the health status of Ukrainian filmmaker Oleg Sentsov.

See also:  Because of Putin in the US sparked a huge scandal

“The President conveyed to President Putin his concerns, given that the health of Mr. Sentsov, like, dangerous, deteriorated, and stressed the importance that Russia urgently found a humanitarian solution to the situation”, – reads the statement of the press service of the Macron.